A big step towards transparency in coding education

Update as of April 6, 2017: CIRR has published the full stats for Thinkful and every participating school. We've reproduced them at the conclusion of this blog post.

Transparency builds trust. Four years ago the earliest adopters of job placement schools were risk-taking pioneers – trusting their tuition dollars without proof of efficacy. Today every good school publishes data on how their students perform, but, [as I wrote a year ago](https://techcrunch.com/2016/06/25/students-are-demanding-the-facts-about-coding-bootcamps/), that’s really just the beginning for our nascent industry. Students now need to be able to make apples to apples comparisons of schools – when everyone reports 95% success rates despite massive differences, something ain’t right. That’s why today we’re ecstatic to announce our involvement in Council on Integrity on Results Reporting (CIRR). It’s the first effort to find common ground for reporting on student outcomes, letting students see the facts for themselves. We’re proud to be the only online school involved in the effort and the only school so far to represent self-paced coding programs.

In our view there will be the schools that embrace the transparency represented by CIRR and the schools that disappear. To do anything else disrespects the scale of the decision students’ are making when they choose a school, and the impact education has on their lives.

CIRR isn’t perfect, but it’s a good 1.0 we’re proud to endorse from day 1. One area sadly overlooked was how to report on graduates’ salaries. As the only online school, and the only school to offer self-paced programs, Thinkful has unique insight into the differences between students in different parts of the country succeeding in our programs. Basically, people in San Francisco make more money, and pay more in rent than nearly any other city (NYC is the other high roller). So, while schools in the largest cities will show higher salaries than schools elsewhere those students also experience higher salaries before they attend school, and a higher cost of living as well. As a result, schools with students outside a couple wealthy areas appear to perform worse when CIRR reports only on starting salaries.

The simplest solution is to report on the increase in salaries graduates enjoy rather than the absolute dollar amounts. But after much debate, and because many schools simply don’t yet collect incoming student salary data, the group decided to push this to the next revision of the CIRR standard. Thinkful has been collecting and reporting on this information for over a year and we’ll continue do so as part of CIRR.

Our other major note is that our graduation rate in our first CIRR report looks significantly better than what we report in our own jobs report because of the relatively long delay CIRR demands of schools. Over time our CIRR stats (which are to be updated twice annually and only include a small subset of our students) and what we report on Thinkful (which are automatically updated monthly and include all students who’ve ever enrolled in our programs) will converge. We also learned a couple things from the CIRR process and will be updating some details about how we report our data. CIRR has created an exciting roadmap for us, so we’re excited to also repeat our 3rd-party audit in the coming months.

I suspect a few schools haven’t yet joined CIRR because so many previous efforts have failed. Kudos and a big thank you to Rick and his team at Skills Fund — they’ve shepherded the CIRR to this great start and their timing was spot on. It’s also great to have Code Fellows, Codeup, DevMountain, Epicodus, Hackbright Academy, Hack Reactor, Ironhack, Grand Circus, RefactorU, Sabio, The Software Guild, Thinkful, Turing, and Course Report with us and we look forward to seeing the standard gain yet more adoption now that your months of work is public.

Without further ado, here are Thinkful's stats and the full stats of the original CIRR members. 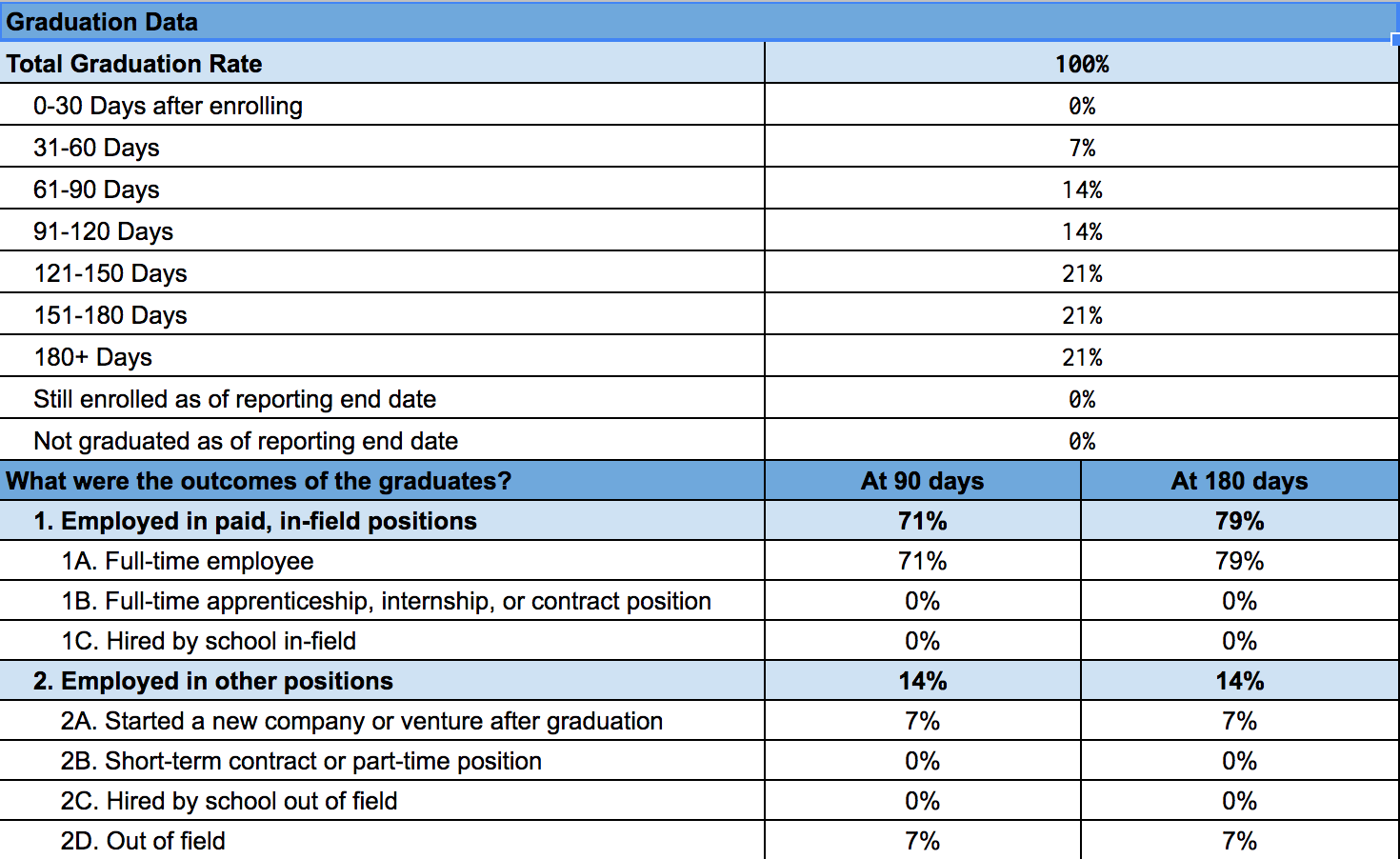