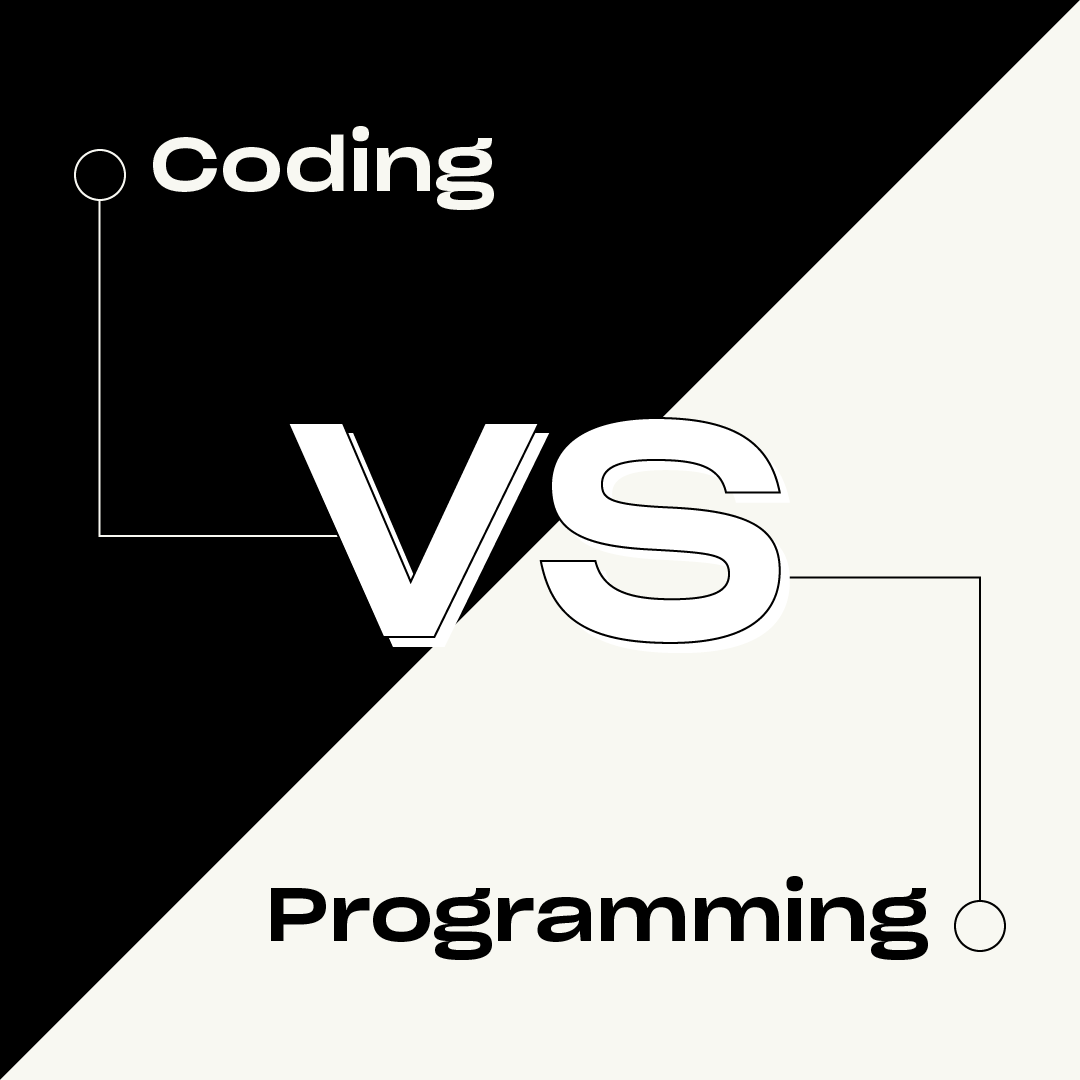 Anyone with even a remote interest in the world of computers and technology must have encountered the words ‘coding’ and ‘programming’. These terms have become part of our lexicon through pop culture such as TV, movies, and video games. People now use them liberally without understanding their meaning, and often use them interchangeably.

But coding and programming are distinct from each other, even though they both refer to software engineering. In short, coding is a subset of programming.


What's The Difference Between Coding and Programming?

While coding and programming have a lot of overlap, there's one main difference. Coding describes one particular skill: the act of writing computer code. Programming involves coding, as well as a range of other, related web development skills.

In the simplest of terms, coding means translating logic or instruction into a language a machine understands. Computers react to  strings of ones and zeroes known as the binary language. In order to give a computer instructions, we have to speak its own language. So a coder serves as a translator for the computer.

English has to be converted into a computer language like Java in order for a computer to execute any task. This is what's called coding.

Programming, on the other hand, involves a more complex set of processes of which coding is just one. A machine or software is programmed to perform certain tasks using a set of instructions. For instance, a social media platform like Facebook is programmed by a software developer who has to create its different features like messaging, like/unlike, status update, image upload, and so on.

The tools used in both coding and programming are also different. A simple text editor would suffice for the purposes of coding. In the case of programming though, a web developer needs analysis tools, modeling programs, code generators, testing frameworks, and the list goes on.

In terms of work methodology, coding follows a trial-and-error approach without needing any prior groundwork, while programming is more methodical and requires much more attention to detail.

The salaries for coders and programmers will be around the same, depending on location, years of experience, company size and industry.

How to Learn Coding and Programming

Different sets of skills and knowledge are required for careers in coding and programming. To become a coder, you’ll need in-depth knowledge of computer languages such as Java, BASIC, C, C++, COBOL, and a variety of other frontend and backend languages. One or two languages is enough to build a website, but having a broad range of computer vocab at your fingertips will put you ahead in the job market, and help you bring in higher salaries.

To be an expert programmer, you’ll need to be a skilled coder but also excellent at math and science, and be able to apply that knowledge in the field of software development.  Newbie developers start off by learning advanced programming techniques and mastering a few different languages. Once they’ve got a few years of experience under their belt, they typically move up the ranks to senior developer roles.

Whether you choose to go for coding or take up programming as your ideal career path, you will need to be excellent at math and logic, and fairly adept at science. If you enjoy learning these subjects, you’ll relish the challenge of using code to bring your ideas to life in websites and apps.

One of the main reasons for the compensation difference is that the skills required for both are markedly different. Programmers often use independent thinking and problem-solving skills in the course of their jobs.

Those skills play into what a coders does, too. But coders generally follow a given set of instructions to write a code for a particular task.

Programmers usually have to come up with not only the solution to a problem, but also anticipate future issues that can occur in a software and preemptively solve them.

If programming is a fully cooked meal, coding is one of the ingredients that has gone into the dish.

How to Get Started

Continuous training and practice are required to be adept in any field, and web development is no different. Whether you want to become a coder or a programmer, the best way to figure out if it’s the right field for you is to start learning now; experience the wins and frustrations first-hand.

You can start by taking beginner level courses in development, and finding ways to practice your new coding skills on your own. There are plenty of tutorials and blogs that are specifically geared towards aspiring programmers - and many of them are free.

Once you’ve cemented the basics, enroll in a course that covers everything you need to know to become a full stack developer. Learning to code is a useful challenge, but it won’t necessarily lead to a full-fledged career without learning the current techniques for front end and back end coding, and leaning on an industry mentor for career guidance as you learn.

When you’ve built up your skills, reach out to some local software companies that could give you hands-on, real-world training. Share your portfolio, and ask for an informational interview or even an internship to serve as your introduction into the programming field.

Coding Vs. Programming: What You’ll Do on The Job

A programmer usually takes several weeks to deliver a project. The finished product, whether it’s a new website, software or app feature, requires thorough, meticulous work from the planning and coding stages, through testing and final launch.

Coding may only take a few hours, since it doesn’t typically require research, preparation or quality testing.

Another major difference between coding and programming is that programming constitutes high levels of complex thinking and problem solving. While developing a software, programmers have to come up with solutions to potential problems before the process of coding has even begun. Once the groundwork is laid by the programmers, coders simply have to fill in the blueprint using their codes.

If you’re new to the web development field, you’ll likely get hired as an entry-level programmer, rather than a “coder.” Coding will be one aspect of your work, but it doesn’t capture everything that a developer does to be successful.

Whether your end goal is a Programmer, Developer or Engineer title, you can build a career based on code. You’ll enjoy fulfilling work that offers new challenges every day, and puts you in position to build a company’s success. If you’re ready to start exploring your options, book some time with an Admissions Rep and we’ll walk you through our full-time and part-time paths to become a developer.

Do I need a degree to get a job in coding or programming?

You don't need a college degree to get hired in the field of web development. You can learn the skills you need by enrolling in our Web Development bootcamp, or even teaching yourself to code.

Are there free resources that will help me learn?

You can learn to code for free, at least at a beginner level. Start with online tutorials that teach you to apply a code by actually building a web page or tool yourself.

What language should I learn first?

Start by learning HTML and CSS. You'll teach your brain how to learn code, and find more advanced languages much easier to pick up.