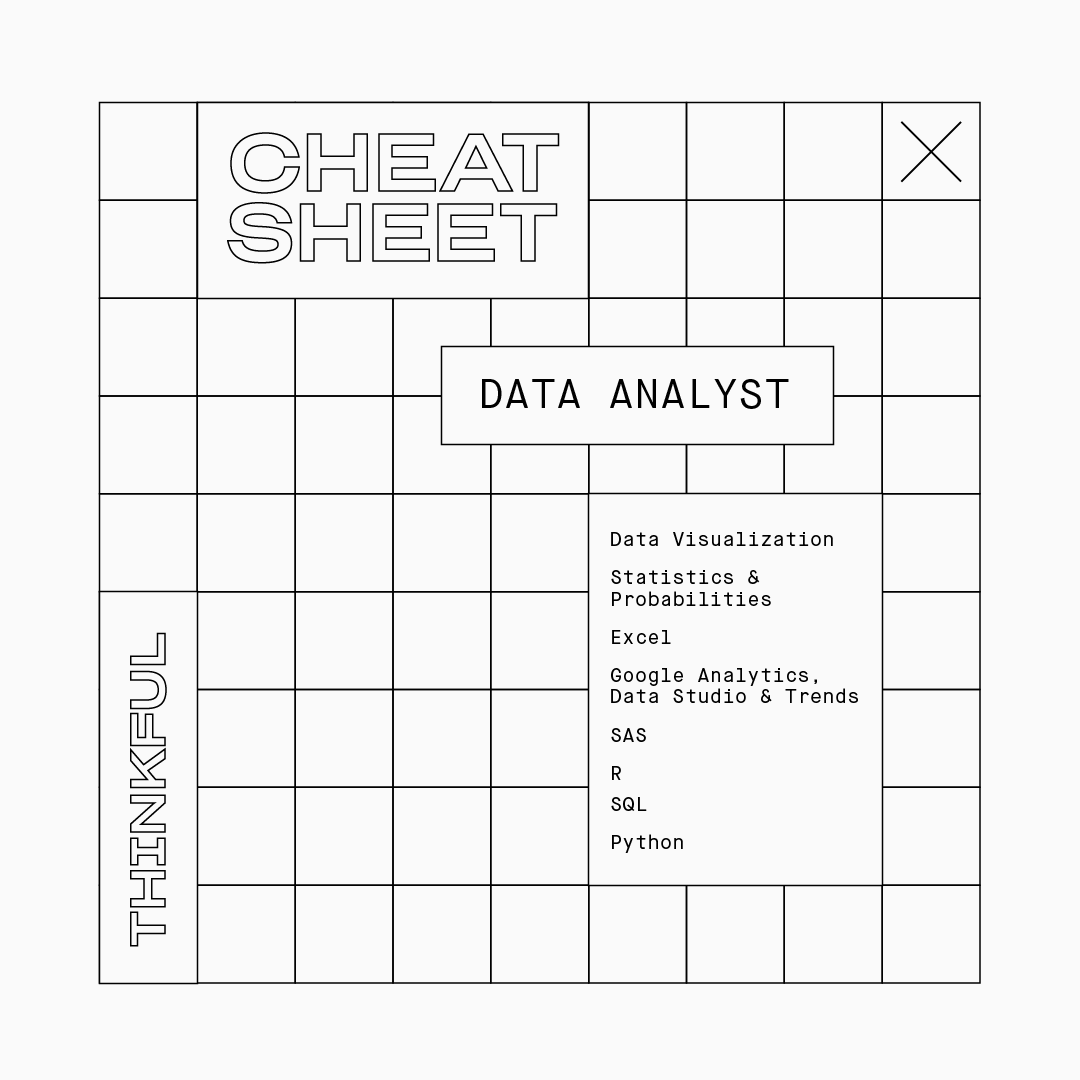 Data analysts pull some pretty amazing insights from numbers and charts, and they don’t do it alone. In order to do their work accurately and efficiently, analysts have a whole host of technical tools at their disposal, like statistics equations, specialized software and coding languages.

But you can only keep so many SQL commands and Excel formulas in your head at one time. Whether you’re venturing into data for the first time or already a seasoned analyst, you’ve probably discovered that you don’t really need to memorize hundreds of equations and commands to be successful. You just need to ask the right questions and use the best tool for the task at hand. Most importantly, you have to know how to find the resources you need.

We rounded up some of our favorite at-a-glance reference sheets to help you build tables, customize reports, and find those marginal distributions even faster. Save this nifty cheat sheet to your Favorites. Trust us, it’s much faster than racking your brain for an obscure Excel formula.

The implications of your numerical findings might be obvious to you, but you’ll have to illustrate your process and results in order to convey that impact to other teams. Building visually striking charts, graphs and dashboards is a huge part of any analyst’s job, especially if you’re building a long-term career around data.

We focused on a couple of visualization programs favored by analysts. Ggplot2 is a tool often used for programming in R. Since it comes with its own syntax and formulas, it warrants its own reference sheet (published by R Studio). Tableau is another program that converts data into visually appealing dashboards and worksheets, and is frequently used by business analysts.

We’ve also included a few pages that outline the general principles and guidelines for visualizing data clearly (because we could all use a refresher sometimes).

Math will play into any analyst’s responsibilities. There will be certain functions you use all the time, but others may only pop up once in a great while. And when that happens, you shouldn’t have to dig out your old Stats 101 study guides to refresh your memory.

Here are some materials that serve as a good overview of the statistical methods you’ll use most frequently as a data analyst.

Even with all the new software and coding languages that have been developed in the last decade, Excel remains one of the most powerful data manipulation tools. As an analyst, you’re probably already pretty adept with Excel basics. But there’s always a shortcut you didn’t know about, or a lengthy formula that’s just easier to copy and paste.

Below is your complete guide to the Excel formulas and functions to make your life as an analyst a little bit easier (and faster).

If you’re in the marketing department or responsible for sales reporting, you probably have at least one Google tool opened up on your screen right now. Whether you use Trends to research up-and-coming search topics, prepare reports in Data Studio or track site visitors in Analytics, the search giant is giving you tons of valuable information about how well your site is performing and how to reel in more customers.

If you use any Google tools on a regular basis, look for ways to automate your reporting and dashboards. But if you need to quickly pinpoint some information for a one-off project, these guides will help you get the info you need from the three tools that are invaluable for any marketing data analyst.

The SAS programming language was developed for data management and analytics. It’s high on the list of languages you’ll need to know - especially if you eventually advance into machine learning and data science. It’s frequently used in business and academic settings to predict outcomes based on existing data patterns.

If SAS is just one of many programming languages you work with, it can be hard to remember the different rules and syntax used in each one. Good thing you don’t have to. Below are our top three SAS cheat sheets for data analysts.

The R programming language was developed specifically for statistical calculations. It’s used to organize data and create graphs. Data analysts often use R to import and clean data, and sometimes favor it over other languages since it lends itself to a wide variety of statistical computations.

If you need to get a little more fluent in R or troubleshoot a bug, below are the resources you need to make the most of this powerful language. We’ve compiled some cheat sheets for R and RStudio (the app for editing and executing R commands). We also covered dplyr and tidyr, two popular programs that many analysts use in conjunction with R.

SQL is another coding language favored by statisticians and analysts. It’s the perfect tool for organizing large datasets in tables, and allows multiple users to manipulate the same data without overwriting each other’s work.

But if you haven’t committed the entire SQL universe to memory, no judgment here. These are the commands and keywords you need to know.

Python isn’t specific to numbers and data, but it’s one of the most common and versatile languages in the world of programming. The relatively simple syntax and structure makes it pretty easy for newbie programmers to grasp. But that doesn’t mean it’s limited: thousands of apps and software tools have been developed using python. It’s become a mainstay for data scientists, analysts and financial professionals.

As a data analyst, you’ll probably run into some lines of python now and then even if you’re not using it every day. Use the below reference sheets, dictionary and style guide to quickly write and edit in python. We also included some cheat sheets for pandas, the popular software used in conjunction with python to manipulate tables.

So there you have it: one single resource with all of your statistical, coding and data visualization needs. Here’s to discovering your business insights even faster.

In a tech field like data analysis, the tools of the trade are always evolving. Stay up-to-date on data news and development to keep your skills sharp and take advantage of all the latest technology.

Do you have your own favorite data tricks and shortcuts? Help out your fellow analysts and numbers nerds by sharing them with @thinkful on twitter.

And if you’re a self-taught analyst who’s ready to move up in the field, we recommend taking a structured Data Analysis course. There’s a whole world of free guides, hacks and tutorials online that can help you pick up the basics. But in order to see all of these tools work together and use them efficiently in a business context, you’ll need a curriculum, experienced instructor, and personal mentor. We’ll give you all of the above, and you’ll owe us $0 until you’re hired.

Getting a Data Analyst Job