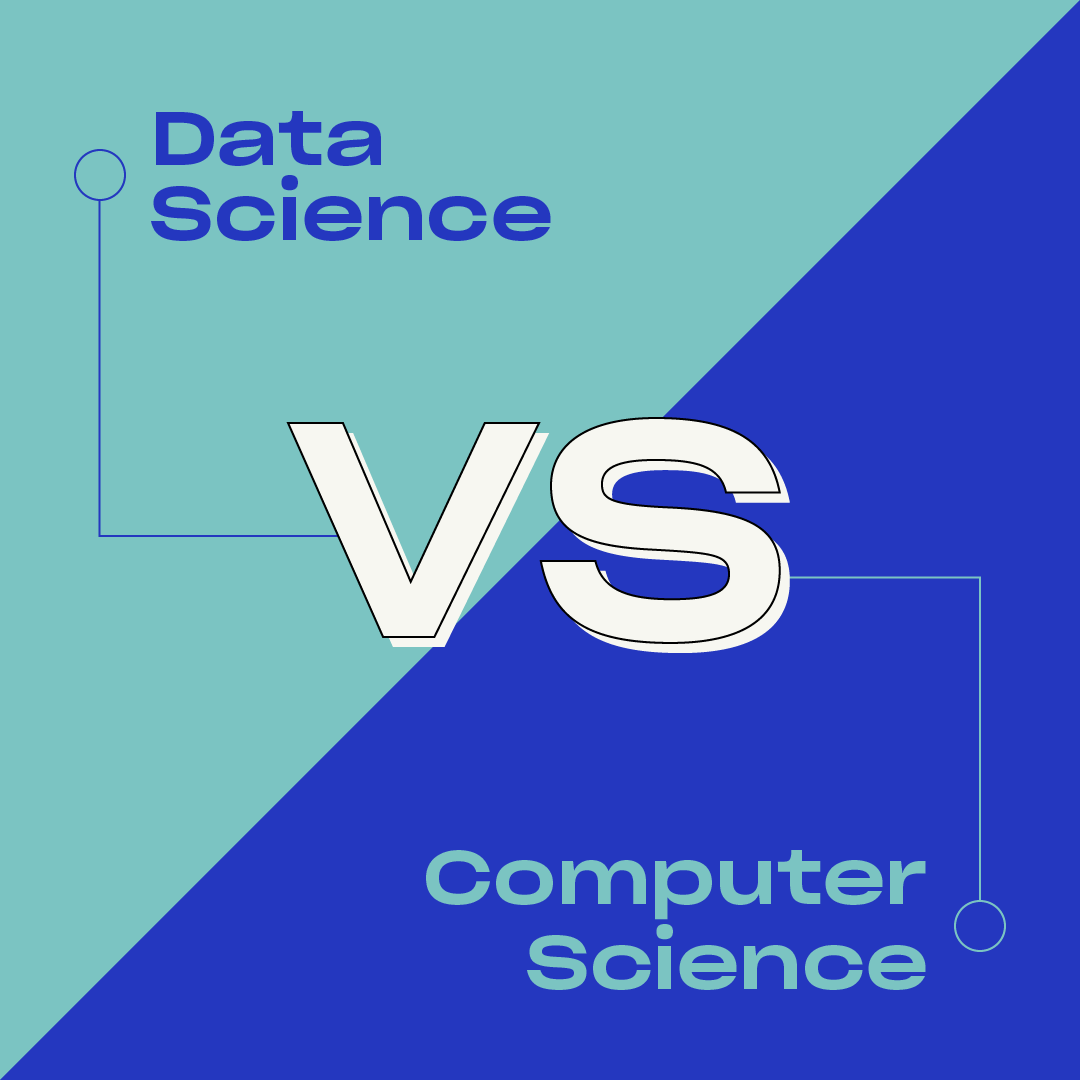 
What is the Difference Between Data Science and Computer Science?

Modern-day data science also relies on certain coding languages to parse through vast amounts of data. But data science is less concerned with how the software actually works. Instead, a Data Scientist hones in on the algorithms that detect patterns in data and predict future outcomes.

Beginning a Career in Data Science vs Computer Science

How to Begin a Career in Data Science

While both branches are related to the same root of computers and technology, an aspiring data scientist will need to recognize their particular knack in this field and choose their specialization accordingly. If you’re interested in becoming a data scientist, you should ensure that your data science course allows you to study linear algebra, statistics, and calculus in your four-year Bachelor degree.

You’ll need to be proficient with a toolkit to help in various environments, which will most likely be a combination of SQL, coding, command line, and cloud technology.

By the end of your education, you should be able to process complex sets of data using your technical knowledge. You’ll then want to apply those skills with on-the-job training. Many graduates start out at smaller companies, where they can quickly begin to apply their theoretical knowledge, putting it efficiently into practice at work. Building practical experience is the best way to advance your data science career, secure a higher salary and broaden your scope of expertise.

How to Begin a Career as a Computer Scientist

You can build a solid foundation for your computer science career path early by choosing to study mathematics and computer science in school. Most IT companies will hire college graduates looking to apply their new skills before pursuing a master’s qualification, which will ultimately net you a more senior position with a more attractive salary.

How to Succeed in Data Science

Data scientists work closely with stakeholders and executives within a business to gain an understanding of their key goals. They examine how data can be used to achieve their goals and move the business forward. To be successful as a data scientist, you’ll need to be flexible and adaptable, open to new ideas, and capable of developing and proposing innovative solutions.

As a data scientist working with different teams, you’ll need to maintain an awareness of business decisions being made in different departments. This will allow you to focus your efforts on data projects that will in turn shape further decision making in the company. You should also pay attention to the kind of data the company intends to collect or discard.

With experience, you’ll develop a stronger understanding of customer behavior and how to effectively use data for further customer satisfaction, which is a priority for all businesses.

How to Succeed in Computer Science

Computer scientists, on the other hand, are often seen as mathematicians, as they are involved in thinking about and conceptualizing computational and math-related problems and challenges. They also write code, create applications, and develop websites. Their job entails developing mathematical models that can serve as interactive tools between computers and people.

To excel as a computer scientist, you need an ability to translate theory into application, wherever possible. You must be efficient in programming, so keep your knowledge of programming languages up to date and well-practiced.

Besides strong computer and tech skills, you should also work to develop your communication and teamwork skills. Staying on the forefront in today’s competitive market means continuously developing your skills and consistently striving for excellence.

Difference in Salaries for Data Scientists vs Computer Scientists

A data scientist needs to have the technical skills to collect and analyze data, as well as exceptional communication and management skills. Industry hopefuls will need to pursue higher education through college or a coding bootcamp, the latter of which provides the quickest pathway to establishing yourself as a data scientist.

Aspiring data scientists should be skilled in statistics, mathematics, and programming, with a strong academic background. They may also pursue a master’s degree or a doctorate in either computers, engineering, or statistics.  Some educational institutions provide specialized fast-track programs catering to the career goals of data scientists.

Computer scientists are responsible for building new technologies, and many of them opt to specialize in a particular branch of study. Computer scientists test new systems and designs, create new computing languages, and develop and simplify algorithms. An aspiring computer scientist should pursue a bachelor’s degree in computer science that includes programming, algorithms, mathematics, data structures, operating systems, and software security.

If you’re hoping to land a leadership role in computer science, a master’s degree is the way to go. This will allow you to specialize in software engineering, databases, or modeling. With constantly emerging new technologies, computer scientists are in high demand across national and international markets.

Hopefully you now have a good understanding of the differences between data science and computer science. To summarize, data science refers to a specific field of knowledge within the study of computers, focusing on programming, analytics, and statistics. Computer science deals with building hardware and programming software.

Both career paths are immensely rewarding, however demand for data scientists is growing faster than the need for computer scientists. The wealth of data being generated all over the world, and businesses’ need for someone to process all that data, means that talented data scientists will have no problem finding a high-paying job.

Read more useful facts about data science careers on our blog. And when you’re ready to take the plunge into the tech industry, enroll in our online data science bootcamp.

Getting a Data Scientist Job