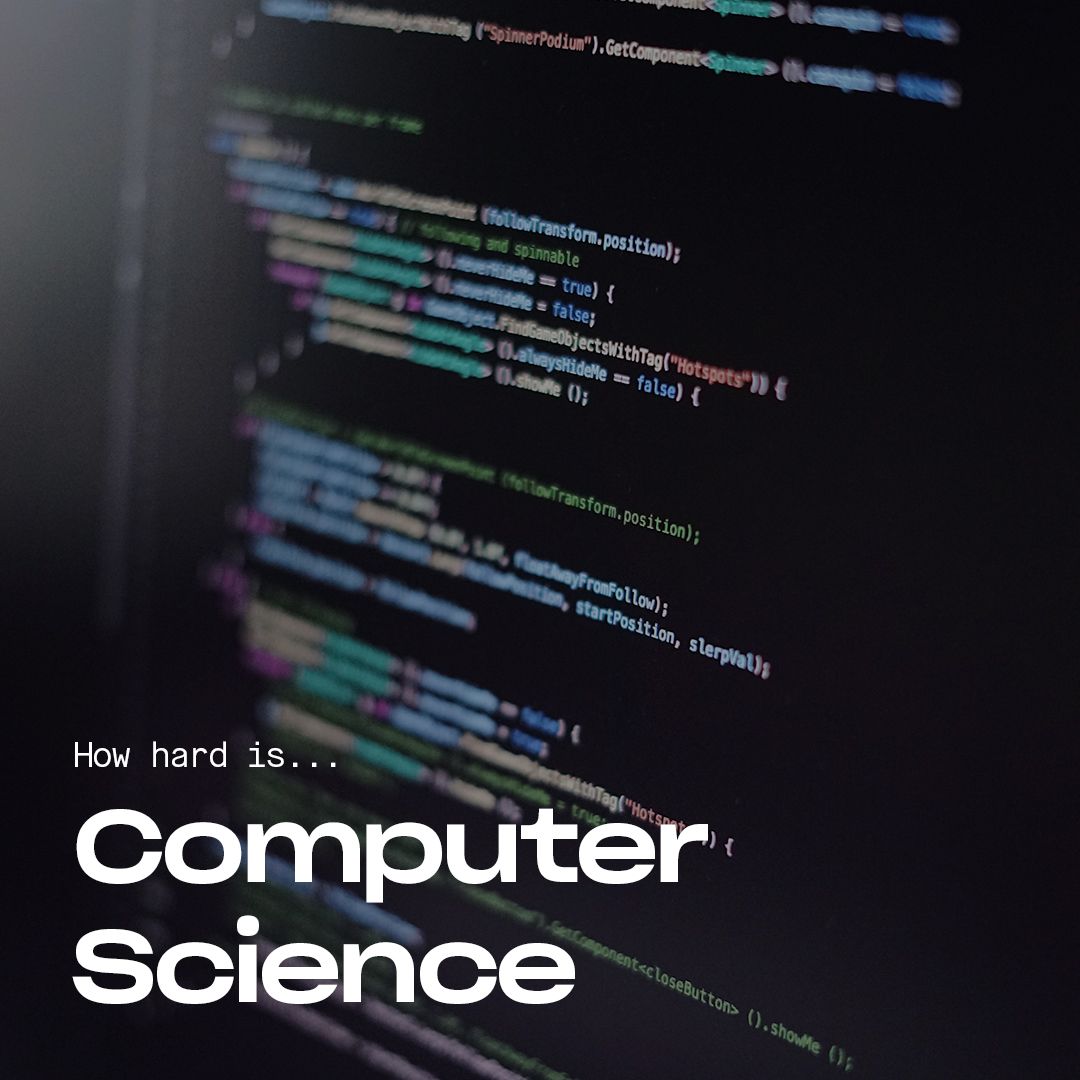 How Hard is Computer Science?

Computer science is an increasingly popular area of study, and for good reason. According to the Bureau of Labor Statistics (BLS), over half a million new jobs will be created in the computer and information technology space by 2028. The industry is expected to grow much faster than the average for all occupations. So if you choose to learn computer science and related tech skills like coding, you’ll have your pick of great jobs.

With that kind of growth on the horizon, tech is an attractive career path for anyone weighing up their options. If this sounds like you, first you’ll need to narrow down which areas of the industry fit your skills, personality, lifestyle and goals. To help you get an idea, try out Thinkful’s tech career quiz.

In this article, we’ll take a closer look at computer science—why it’s important, how hard it is to get into, and how to kick-start a career in this exciting field.

What Is Computer Science?

Computer science is the study of computers, including computational theory, hardware and software design, algorithms, and human interaction with technology. Computer scientists generally work with software and software systems. Unlike IT and hardware engineers, who work with the computer hardware, a computer scientist specializes in the theory, design, development, and application of the software.
Key fields of study in computer science include artificial intelligence, computer systems, database systems, human-computer interaction, graphics, and visuals. Computer science also includes subjects like software engineering, bioinformatics, programming languages, the theory of computing, and numerical analysis.
Why Is Computer Science Popular?
In the United States alone, computer science is the third most popular major course for students from abroad. There are a number of reasons for this, such as excellent job security, higher than average paychecks, and diverse job prospects across industries, to name a few.
Computer science deals with human-made and natural information processes in computing systems and machines. These processes can include communication, control, perception, learning, and intelligence. CS also deals with algorithms, computational problems, computer hardware design, software, and applications.A typical computer science course will guide you in how to create and use new technologies. These courses usually include the study of computers and algorithmic processes—their principles, hardware and software designs, and their applications. This area of study will help you sharpen your computational skills and critical thinking abilities, which will prepare you for a wide variety of professional challenges, no matter what field of study or work you eventually pursue.
Another reason why computer science is a popular area of study is the potential for career advancement and significantly higher salaries. The 2017 BLS report suggests that the median annual salary for technology workers in the US was around $84,850. Compare that to the median annual wage of all U.S. workers—which at $37,690 is less than half that figure. If you’re interested in finding out more about typical tech salaries, Thinkful provides regular updates on its long-term student outcomes.
Computer Science CareersAside from taking home a healthy salary, the added advantage of a career in computer science is that your options won’t be limited. A computer science degree doesn’t converge into a single channel—rather, it opens up a range of professional prospects. To give you an idea of the career paths that stem from computer science, take a look at the following job titles. Each of the roles listed below will suit candidates with computer science degrees:Software development engineerSoftware developerNetwork engineerJava software developerSystems engineerSolutions architectApplications developer.NET developerA qualification in computer science opens up a broad range of in-demand career opportunities in the tech industry. Coding is an incredibly important skill that’s related to computer science; if you master a few key coding languages, you could earn any of the following related titles: Software engineerComputer programmerFront-end developerBack-end developerFull-stack developerWeb developerIf you’re specifically interested in learning how to code, then focus your research on the details of back-end and front-end programming rather than a computer science degree, which is much more broad and may not be applicable to your career goals. It’s clear that a computer science education, or a specialized education in computer programming, can lead to a whole range of high-paying jobs.
How Hard is Computer Science?
If you’re serious about pursuing a career in computer science, there are probably a few questions that have crossed your mind by now. Is it something anyone can learn? Is it difficult to build a career out of? Just how hard is computer science?
We’ll cut straight to the chase and tell you that computer science is not a tough nut to crack, despite what you might have heard. Two things you’ll need in good supply, however, are patience and determination. Patience, discipline, and a methodical approach is the holy trinity when it comes to computer science.
Like any other specialized technical field, computer science requires time and dedication to master the concepts, theories, and applications of what you’ve learned. Creative thinking, analytical skills, and a lot of trial and error will be essential for students looking for solutions in this field.

How Much Math Is There in Computer Science?
A lot of students are intimidated by math, so it’s not unusual to hear this question in relation to computer science courses. The truth is, the proportion of math in computer science will depend on the type of program and the school you opt for. The focus of your program will be on mastering the tech concepts and hands-on skills needed in the field—but all career-oriented computer science programs will include at least some mathematical statistics and analysis. So you can expect a fair amount of math in any school or program offering a computer science degree.
In computer science, math is used to program systems to run more efficiently. The good news is that most of the math incorporated in computer science is relatively easy. And if math is not your strong suit, you’ll be relieved to hear that its not always required to perform the everyday duties of many job profiles in the field.

How to Begin a Career in Computer Science
If you’re interested in becoming a computer scientist, a bachelor’s degree with a computer science major is a great first step. Many students choose a four-year degree, which has the potential to lead to high-paying roles in tech companies.