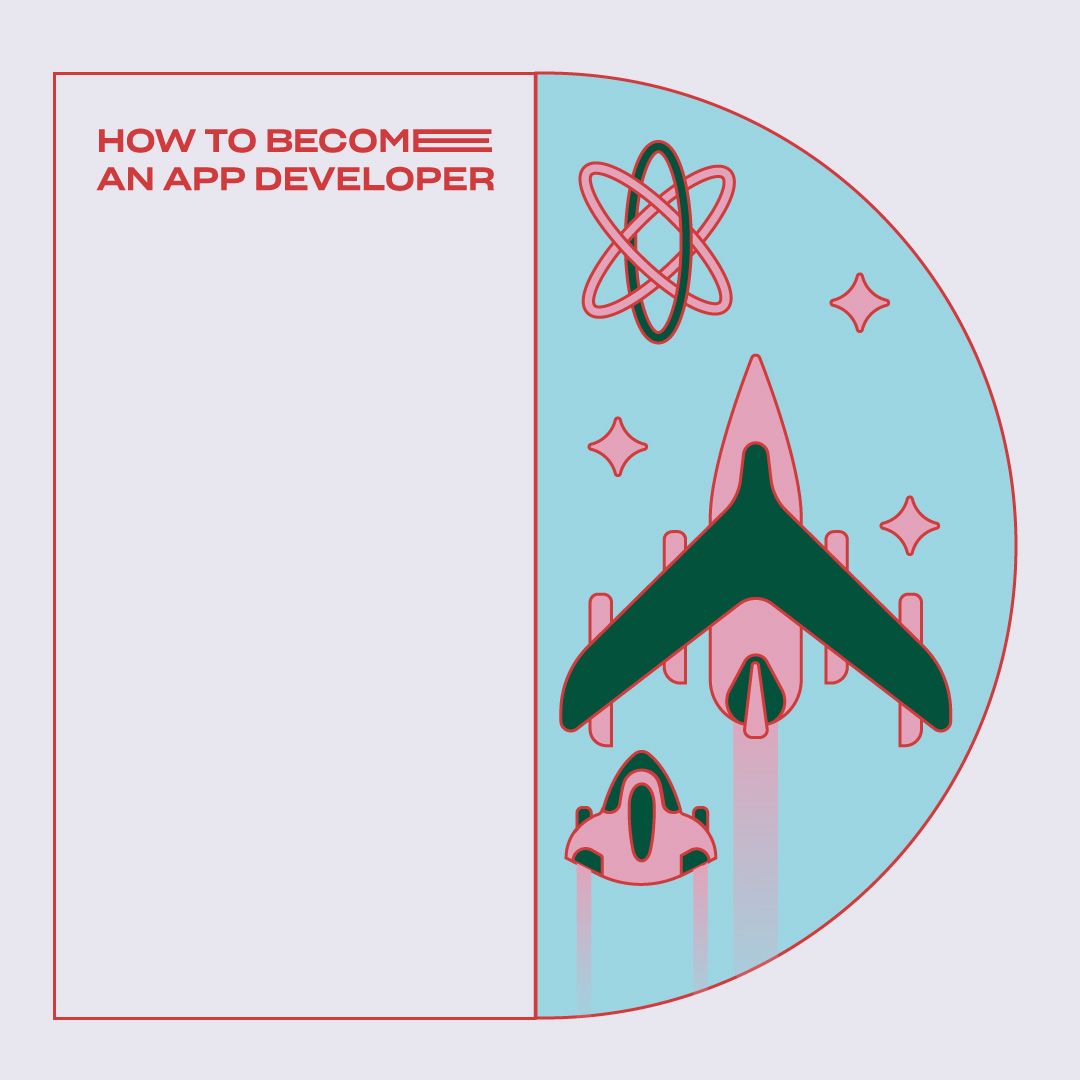 How to Become an App Developer

New apps are released every day for business, entertainment, education, health, fashion, and more. Talented developers who can build user-friendly apps are highly sought-after, well paid and respected within their organization.

What skills do you need to break into this desirable career path? In this article, we’re going to discuss how you can become an app developer. So if you have a revolutionary app idea, or you’d simply like to pursue a creative career in tech, you’ll know how to make it happen.

What Is App Development?

App development is the term used to refer to the entire process of creating new software from scratch. An app developer is a software engineer who’s involved in the conceptualization, design, and development of software for phones, smart watches, tablets and more.

As an app developer, you’ll usually work with teams of data engineers and graphic designers to create these apps.

Desktop apps: These apps are run on stand-alone computers or laptops. Most of them are customized applications developed to suit the needs of an organization. These applications are user friendly, secure, and efficient. They run offline and are best suited for office settings.

Most firms use desktop apps for better performance, faster operation, quick data access, easy synchronization, and most importantly to facilitate the jobs of their employees. Companies also prefer desktop apps as it offers data security from unauthorized access that can plague online apps.

However, there are certain limitations of desktop apps, the very first being that they need to be downloaded and installed on every computer before use. Upgrades of this software must also be carried out periodically for every device on which they’re installed, which makes it quite a strenuous task.

Web apps: Web applications are apps that reside on servers and are delivered to their users via the internet. Unlike desktop apps, web applications have the advantage that users can access them from anywhere. Their advantage is that users don’t need to download and install them on every single computer they use. Further upgrades become easier as you simply need to upgrade the app on the server.

But just like desktop apps, web apps have their downsides as well. Firstly, their performance is heavily reliant on the user’s internet speed--some apps being heavy guzzlers of data. Additionally, web applications aren’t secure since the server can be hacked, and securing a server is a huge task that requires a separate set of skills and expertise.

Mobile apps: Usually when we talk about applications, mobile apps like Pinterest, Uber and Google Maps come to mind. Mobile apps are user friendly and easy to download and install. Most importantly, we’ve all come to rely on a full suite of powerful little icons on our phone screen to get us through our day.

But it’s not easy to build a solution that’s fast and efficient for all users. There are several mobile operating systems, and each has their own specifications and regulations. Some of the most popular ones are the iOS operating system by Apple, and Android, developed by Google. An app developer needs to understand the complexity of each platform. App developers mostly use C language for iOS and Java for Android.

Skills You Need for App Development

As you’d imagine, the skills are quite different for each style of app development. So let’s dive into what you need to know to thrive as an app developer.

If you want to focus on desktop, get ready to learn programming languages like C, Swift, C#, Python, Ruby, JavaFX.

It’s also vitally important to have the ability to think logically. As a desktop app developer, you’ll love to problem-solve.

You should be detail-oriented and also curious enough to develop unique solutions to user problems.

You need to understand HTML, JavaScript, and CSS to succeed as a web app developer. It’s also quite useful to possess knowledge about server systems.

To stand out from the crowd, you’ll need a good sense of design as well as project management skills to adhere to strict deadlines.

A successful mobile app developer needs to make attractive apps for users which requires them to have excellent UI (user interface) design skills. Since there are multiple mobile platforms like iOS, Android, and Windows, software engineers must be able to develop apps for any platform.

Finally, to make popular apps that stand out among the crowd, mobile app developers must also be familiar with business skills.

Bachelor’s degree: A bachelor’s degree in computer science is great for those who have no prior knowledge of the field and who can commit to four years of schooling. This path is great for an entry-level career, but also requires maximum time and financial investment.

Associate degree: If you aren’t willing to spend four years at school or spend a ton of money, you can choose an associate degree. You’ll gain basic educational qualifications in just two years. An associate degree sets up the foundation for a bachelor’s degree.

Bootcamps: Bootcamps are one of the most popular choices from aspiring app developers. They’re great for those who want to start their new career quickly. They’ll also allow you to learn at your own pace.

While both the bachelor’s degree and associate degree offer theoretical knowledge, bootcamps provide more practical knowledge that’s valued by job recruiters. They also offer a specialized curriculum where you can focus on the type of app development you’re interested in.

Online resources: There are hundreds of sites offering free online resources to facilitate self-learning, but the amount of information available online can be overwhelming for a beginner. Although many app developers are self-taught, the journey to becoming one is arduous and suited best for those ready for a challenge.

The Typical Career Path of An App Developer

If you’re really investing your time into a new career, you’ll want to know what to expect a few years down the line. Let’s look at the typical career progression of an app developer.

Junior developer: Your career will take off as a junior developer who writes simple scripts and will often need the guidance of peers.

Senior Developer: With a few years of experience, you‘ll progress to become a senior developer, capable of developing new applications. Additionally, you’ll be mentoring junior members of your team.

Lead Developers: Once you’ve acquired a lot of experience, you’ll become a lead developer who will have to shoulder more responsibility and will be in charge of designing complex new applications.

Development Manager: After several years of gaining expertise, you’ll be promoted to development manager where you’ll be responsible for handling large projects and a team of developers.

Technical Director: Moving up the ladder, you can become a Director, ice President, or even Chief Technology Officer if you prove your team-building and communication skills in addition to your coding ability.

But career growth isn’t always linear. For app developers, there are plenty of specializations to choose from, such as:

Similarly, mobile app developers have a vast number of choices as well. You can branch off in different directions like:

If you’re motivated to enter the industry fast and learn through hands-on projects, opt for a bootcamp.

We offer a Software Engineering Bootcamp designed to get you hired fast.

If you’re still undecided about app development, keep up with our blogs. We have tons of useful content=, and our goal is to help you thrive in tech. Whichever path you choose, we’re cheering you on as you pursue your new career.

Getting a Software Engineering Job