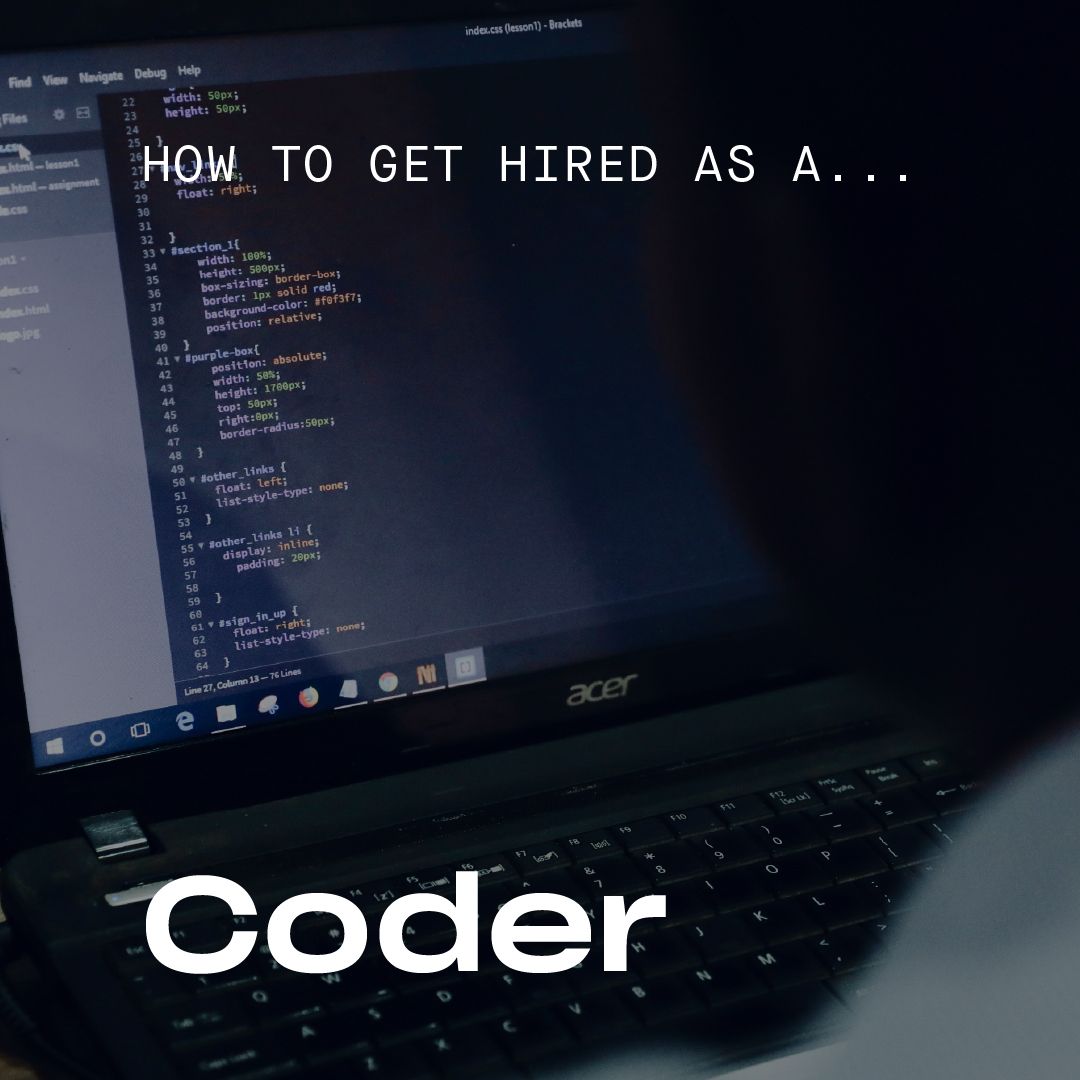 How to Get a Job as a Coder

It’s safe to say that computers have become an integral part of human life. In fact, the world would come to a standstill if computers ceased to work.

Which is why great coders are in such high demand.

Computer programming languages, which serve as a medium of communication between human and machine, are commonly referred to as code. The person who does the coding is called a coder (or software engineer, or programmer - and the list goes on). The coding process involves creating instructions for computers using programming languages. Through this process, coders are able to build the programs we rely on every day,  such as software, operating systems, and mobile apps.

Computer programming is an exciting field that offers plenty of job opportunities and unlimited growth potential. We’ll help you get a start by sharing the skills and languages you’ll need to know to land a coding job.

How Does Coding Work?

Computers can only understand 0’s and 1’s. These are binary inputs. A programming language helps in framing the algorithms that can be read and understood by computers.

Most of the websites that we access are coded with the help of HTML. This language is used to instruct the websites on how to store images, videos, and how to display the contents to the user.

CSS is the next step up from HTML. Basically, CSS is used to add more visually appealing features to a website. CSS is able to work with the layouts, colors, and fonts of a website.

JavaScript is also used to make websites more interactive. This is because you can use JavaScript to create things such as scrolling features and animations. Usually, JavaScript is used with HTML and CSS.

JavaScript should not be confused with JAVA, although JAVA is also a useful language to know. JAVA is the most sought-after programming language for developing games and small applications for the Android platform. It has a unique feature that allows coders to insert comments based on the English language. This allows different coders to work on the same code easily.

PHP is a general-purpose scripting language designed for server-side web development. It’s used to script the server in which the website is loaded. It’s mostly used in combination with HTML to produce dynamic content. Additionally, PHP can be used to develop client-side Graphical User Interface applications as well.

SQL allows coders to access the information stored in a database. This language has numerous applications in different industries including businesses (inventories, trends analysis), healthcare (cancer registries), and education. SQL even has applications in the defense industry.

Skills Needed To Be A Coder:

Becoming a coder is an exciting industry. But knowing a particular programming language alone will not help you land your dream job. There’s a set of skills that you need to possess to become an expert coder. With that being said, let’s dive into those skills one by one.

You’ll need to approach problems logically in order to figure out the best solution. A coder is typically given a basic outline of what the software should do, and it’s up to them to develop a product that works as expected.

Coders are decision-makers in an organization. They’re responsible for achieving the outcome expected from a development project. So they should possess good decision-making skills, which will be the key selling point in an office environment.

Learning one particular programming language is an elaborate process. Learning the theory, mapping the flowchart, and writing syntax alone is not enough. You need hands-on experience to see how the script works. So rather than trying to learn multiple programming languages, start with one and ace that. This will help you master other languages later on.

One of the major responsibilities of a coder is to understand users’ needs. Coders word hard to build software to cater to users. So it’s critical to understand the user’s point of view. To do this, you need to be able to step into the users shoes and be willing to look at things from their perspective.

How To Get Hired As A Coder

Landing your dream job as a coder is probably one of your main priorities. Although a lot of coders possess the skills required to land a job in the field, most of them don’t know how to secure their first job.

If you’re someone who hasn’t learned the skills to become a coder yet, Thinkful’s Software Engineering course is something you’ll want to consider. On top of learning all of the skills you’ll need to know to kickstart a successful career as a coder, Thinkful also guarantees that you’ll find a job post-graduation. They’re so confident that you’ll find a job, that you don’t pay a cent towards your education until you get hired.

If taking another course doesn’t interest you, then you’ll want to follow the recommendations in this list below to land your next job.

Recruiters want to see a portfolio to understand your skillset, as well as your past experience. So, before applying for a job, you should build and maintain a good portfolio that represents your professional identity. To build this, you can take on volunteer projects, use projects from your courses, take on beginner freelance projects, and more.

If you don’t want to build your own website, platforms like GitHub, Source Forge, and Apache Allura are good places to build your portfolio.

Many startups don’t have a ton of funds to hire full-time employees. Because of that, they often choose to hire freelancers. Freelancing is a great way to build your portfolio, and after some time you can actually make a very good living freelancing.

The benefits of freelancing are that you get to work on a variety of projects, you have a lot more flexibility in your career, and you can make a good income if you build a solid reputation.

The disadvantages are that freelancing is not as secure as working with one company, you typically get paid by project instead of being on the payroll, and there’s usually a learning curve when it comes to landing consistent clients.

Approaching a big corporation for an entry-level role can be challenging. Instead, a good option is to approach a startup. Although the pay and perks might be less in a startup, it’ll be one of the best ways to get into the industry. Startups are usually very fast-paced and rapidly growing, so you’ll learn a lot in a short period of time at a startup.

In the age of social media, it’s important to build connections and know what everyone is doing in the corporate world. Use social media handles wisely. With platforms like LinkedIn, connecting with other professionals has become much easier. If you maintain a great profile and connect with peers, you might get lucky in the job-hunting process.

Coding is one domain where you need to compete with a lot of fellow professionals. You should possess at least one distinct skill, which will give you an edge over other applicants. It’s important that you continue to take courses and level-up your skill set.

Technology is advancing at a fast pace. It heavily influences our lives and we’re becoming increasingly dependent on the internet. Coding is one skill that every software company needs and coders are typically the backbone of digital companies. So, if you’re considering a career as a coder, now is the perfect time to enter the field.

If you’d like to make your journey a lot easier, enroll in a course that’ll give you everything you need. From coding skills, to one-on-one mentorship, to the guidance required to ultimately land a job you’ll love, Thinkful’s Software Engineering course has you covered.