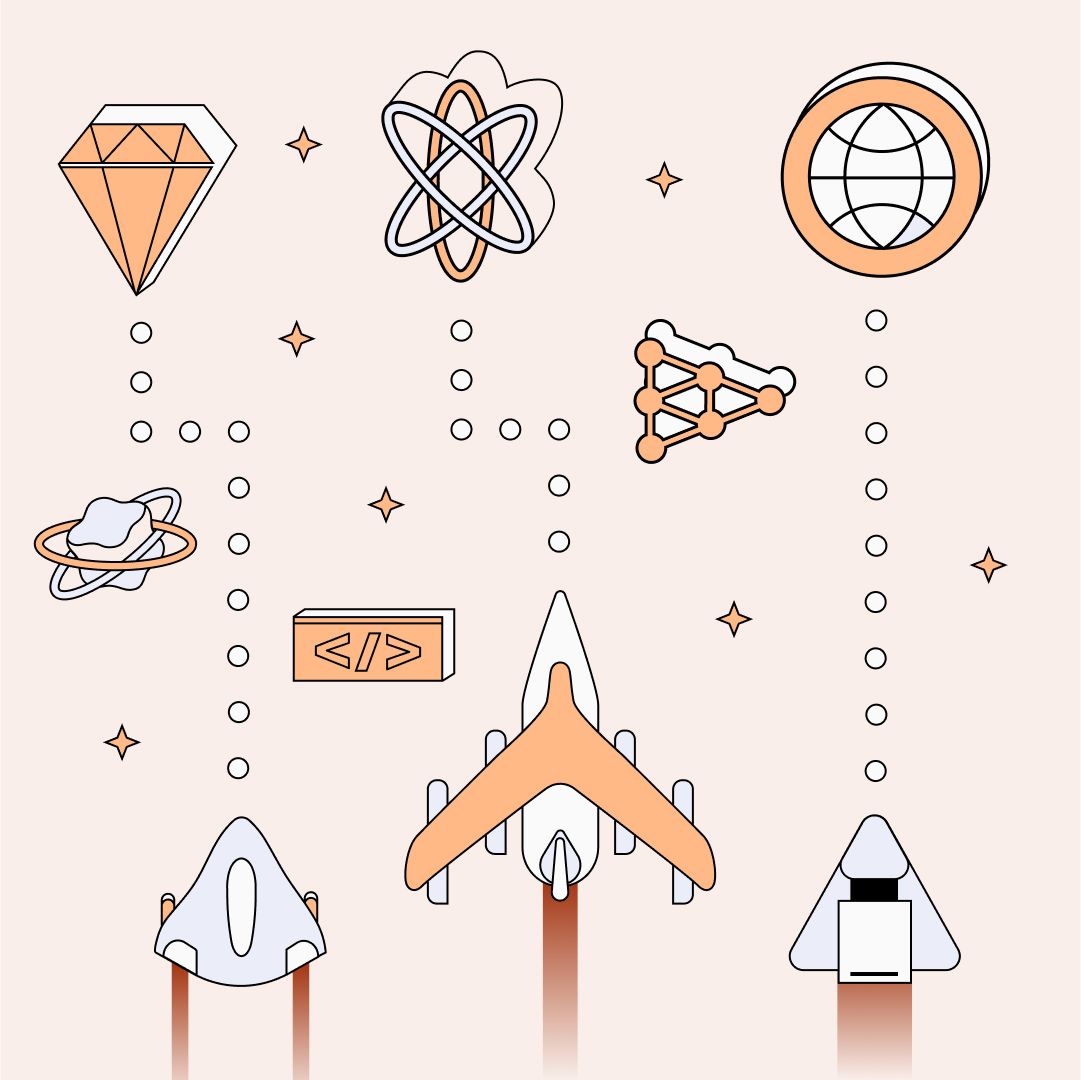 Everyone knows that for a product to be successful and generate hefty sales figures, it needs to solve a common problem. But this alone isn’t enough: it also needs to have a positive emotional impact on the people who use it. There’s no point designing a feature-packed smartphone with a lagging interface and a one-hour battery life.

Both physical and digital products should leave the user feeling great about their purchase. This responsibility lands firmly on the shoulders of highly skilled UX (user experience) designers.

The booming tech sector has created a strong demand for professionals in the UX field. If you want to help meet this demand and learn more about the UX designer career path, this post is a great place to start. We’ll discuss common UX job titles, their roles and responsibilities, and how much you can expect to earn.

We’ll also look at UX/UI bootcamps and how these intensive online courses can springboard your design career.

Answer a few questions to find out which high-paying career path suits you best.

There’s a lot of confusion regarding UX job titles, mainly because UX is often mistaken as a single career. In reality, UX is an umbrella term used for a host of specialized careers. Let’s look at some of the most common job titles in UX:

A UX designer is someone who understands the customer’s mindset and designs according to their needs. Their primary goal is to enhance the user experience by considering a person’s emotions and attitudes about using a product. The UX designer must establish a logical flow in the product.

The role of a UI (user interface) designer is often misunderstood. Many professionals confuse the job with UX design. While some overlap exists, they’re two distinct roles.

Digital products like websites and apps have a GUI (graphical user interface). This handles both the input data and output responses between the user and the system.

The job of the UI designer is to create an interface that’s easy to use and understand. They achieve this with an impressive combination of buttons, menus, search bars, and labels. You may notice a UX/UI designer job title in some organizations, which is the two roles merged into one.

Visual designers are creative artists concerned with the aesthetics of the screen. They’re not responsible for how the user interacts with the interface. Their focus is on typography, color, graphics, visual effects, and layout.

The interaction designer is specifically concerned with the interaction between the user and the screen. This includes the transitions between pages, how the menu slides in or out of the screen, and how user interaction changes the appearance of buttons. This job role is usually found in companies with large projects, where different team members specialize on individual design aspects.

Create user interaction prototypes Understand and analyze how users interact with products Be responsible for each element a user can drag, drop, click, and swipe

A UX researcher aims to fully understand the user’s wants and needs. They conduct thorough research to gain useful insights into the customer’s mindset. Conclusions are presented to the design team to help make informed decisions on how the product should look and feel. Most large organizations have dedicated UX researchers, while this role is merged with UX designers in smaller firms.

The Career Path of a UX Designer

A career in UX not only offers immense job satisfaction but also provides great flexibility. There are a couple of routes that can be taken. One is the technical path, while the other is the managerial path.

If you enjoy working as a UX designer, you might want to dig a little deeper to gain expertise in a domain and become a specialist. You can choose from a range of different fields including interaction designer, GUI designer, or graphic artist.

Perhaps you’re passionate for web technologies and love dabbling in HTML, CSS, and JavaScript. If this sounds like you, a future in front-end web development could be perfect. You also have the option of learning new languages like Python, Ruby, and PHP to transition into a full-stack developer.

With the recent growth in mobile tech, you might also want to consider mobile development, app design, or even video game design.

If you believe you’re good at managing people and would like to lead teams, then this path might be right up your alley. You can work your way up from UX designer to UX manager and then to UX director. This path can also lead you to become the VP of user experience.

You’ll take on a more business-oriented role and be involved in recruitment, resource allocation, and team motivation. This path requires a natural flair for leadership and strong interpersonal skills.

How Much Can You Earn as a UX Designer?

On average, people spend almost three hours on their phones every single day. A staggering 22% of people check their phone every few minutes. It should therefore come as no surprise that mobile UX designer jobs are in high demand.

There are about 17,900 job openings in the UX space each year. This is projected to increase by 13% in the next decade. It's clear from these statistics, that the job outlook is bright for UX designers.

The average compensation for an entry-level UX professional is $89,528 per year. Experienced designers can expect $134,395 per year. UX designers also report high job satisfaction because of the kind of impact their work can make on the world and the professional growth they experience.

How to Become a UX Designer

To start your UX career, you’ll need to learn the skills required to become a professional designer. You’ll also need practical experience in the role. While some people prefer to get a degree, it's been found that individuals entering the field of UX come from various different backgrounds outside of the traditional college route.

Below are a couple of options to help you get started. But for a more detailed guide on cracking into this lucrative field, read our post on how to land a well-paid UX job.

To kickstart your tech career, sign up for our UX/UI design bootcamp. Our expert team will teach you everything you need to land your dream UX job.

How do I become a UX Designer?

You can become a UX designer by learning the basics of design, market research, strategy and product development. In addition to this, you should also learn UX design fundamentals, become familiar with the usage of key UX design tools and work on your own design projects to build your technical skills.

How much do UX Designers make?

The salary of a UX Designer can average at $89,528, depending on years of experience in the field. The salary also depends on experience of working on different platforms. For example, web applications vs. desktop software, iOS vs. Android, etc.

What's the job outlook for a UX Designer?

The field of UX design is highly flexible and provides great career opportunities. A UX designer can choose a technical path by gaining expertise in a specific domain or a managerial path to become a UX manager with abundant scope of growth.

Learn how to design smarter websites from industry professionals, 100% online, with the security of a career guarantee when you graduate.

Getting a UX Job