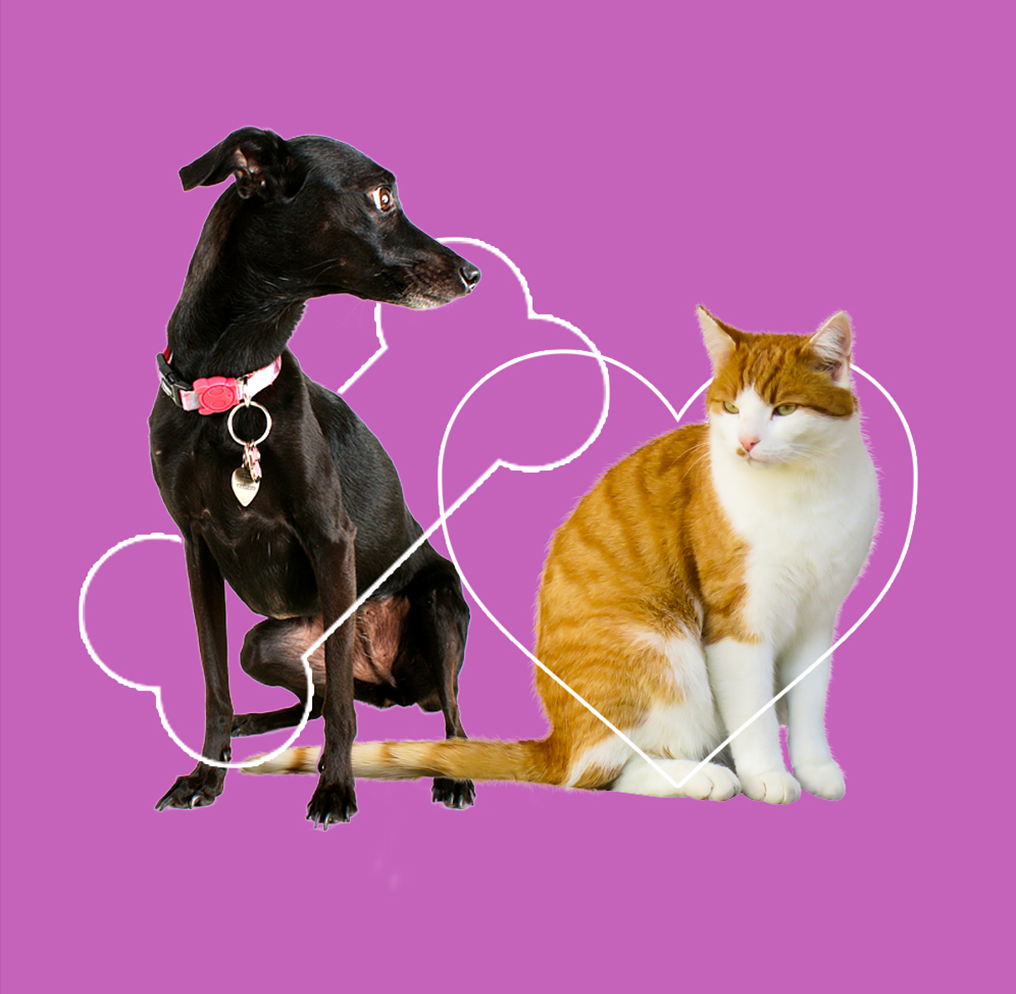 How Data Science Can Help Us Save Animals

Meet Ginger. Ginger is a cairn terrier with a sable tick coat. Ginger is only two months old and was recently fixed. Will you help Ginger find a loving home? 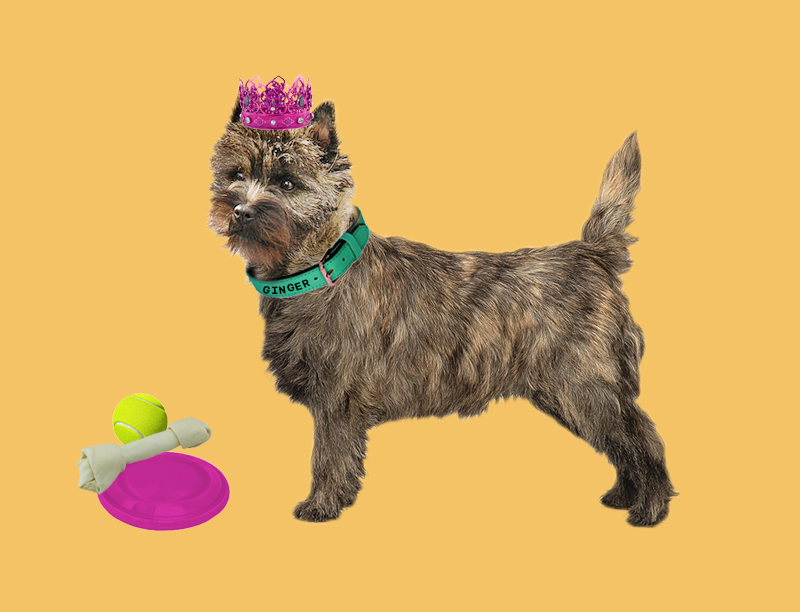 Regardless of whether or not Ginger is the right animal for you, chances are she will be adopted. A recent analysis conducted by Joanne Lin, a student in Thinkful’s data science bootcamp concluded that dogs that meet Ginger’s description (name, coat color and pattern, and breed) are most “adoptable.”

Each year, approximately 6.5 million companion animals end up in shelters. Thanks to the great work by facilities like the Austin Animal Center, half of these animals (the majority of which are cats and dogs) are adopted. But there’s still a lot of work to do to help all animals find a loving home.

So what makes an animal more likely to be adopted? And how can shelters use this information to increase adoptions? In support of National Adopt A Shelter Pet Day (April 30th), Thinkful leveraged the power of data science to understand and predict animal shelter outcomes.

First, she first conducted an exploratory data analysis. This allowed her to better understand the data including the different variables or features that might impact adoption rates. She concluded that the data set required feature engineering to allow for a more nuanced analysis.

Feature engineering, a process that involves building new features into a data set, allows data scientists to process existing data in a way that optimizes model performance. Below is a simplified example of how Joanne built out the features “Coat pattern” and “coat color” that had not originally existed in the data set.

After building out these new features, Joanne used two machine learning models to conduct her analysis. First, she used random forest classifier (explained here) to understand which features were most important to predicting adoption outcomes. Next, she verified her results using a more complicated model called a support vector machine (SVM). The support vector machine allowed Joanne to “draw a boundary” between animals that were adopted and animals that were not adopted along a multi-dimensional plane. The example below shows what this might look like in two dimensions. Note: Joanne’s actual model included 15 dimensions! 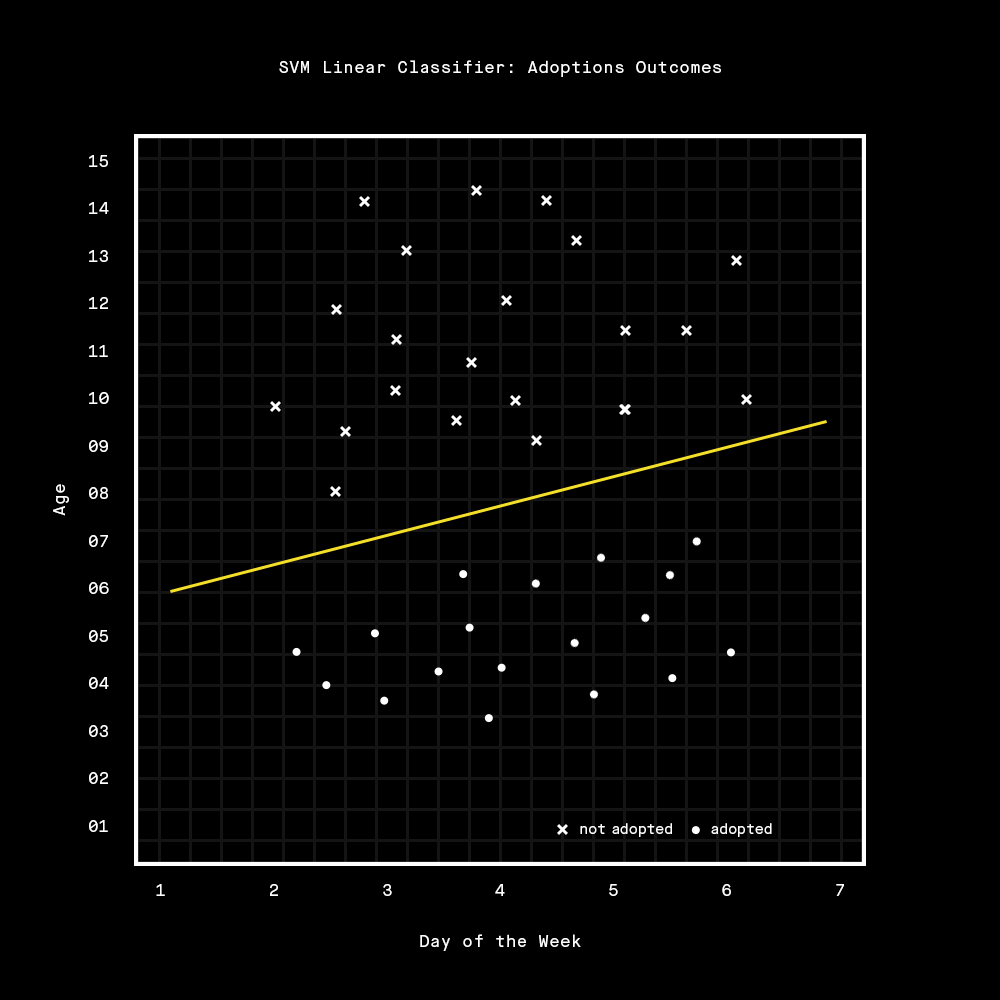 For a more in depth look at Joanne’s methodology, you can visit her Github page.

What really matters in animal adoptions? 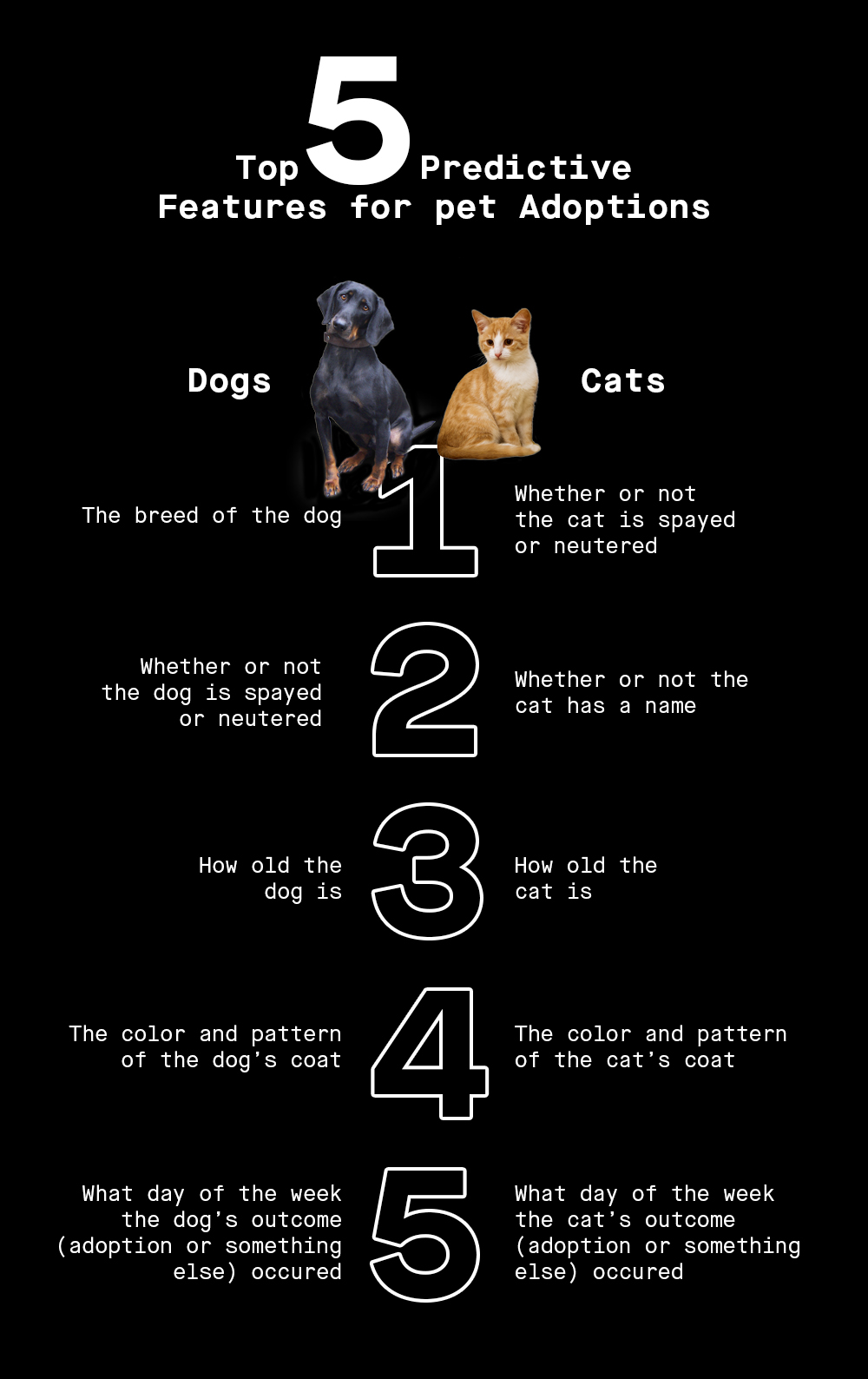 What’s in a name?

Thanks to Joanne, we now know what cat and dog names are most common at shelters (at least in Austin) and which of those names are most desirable for adoptions. 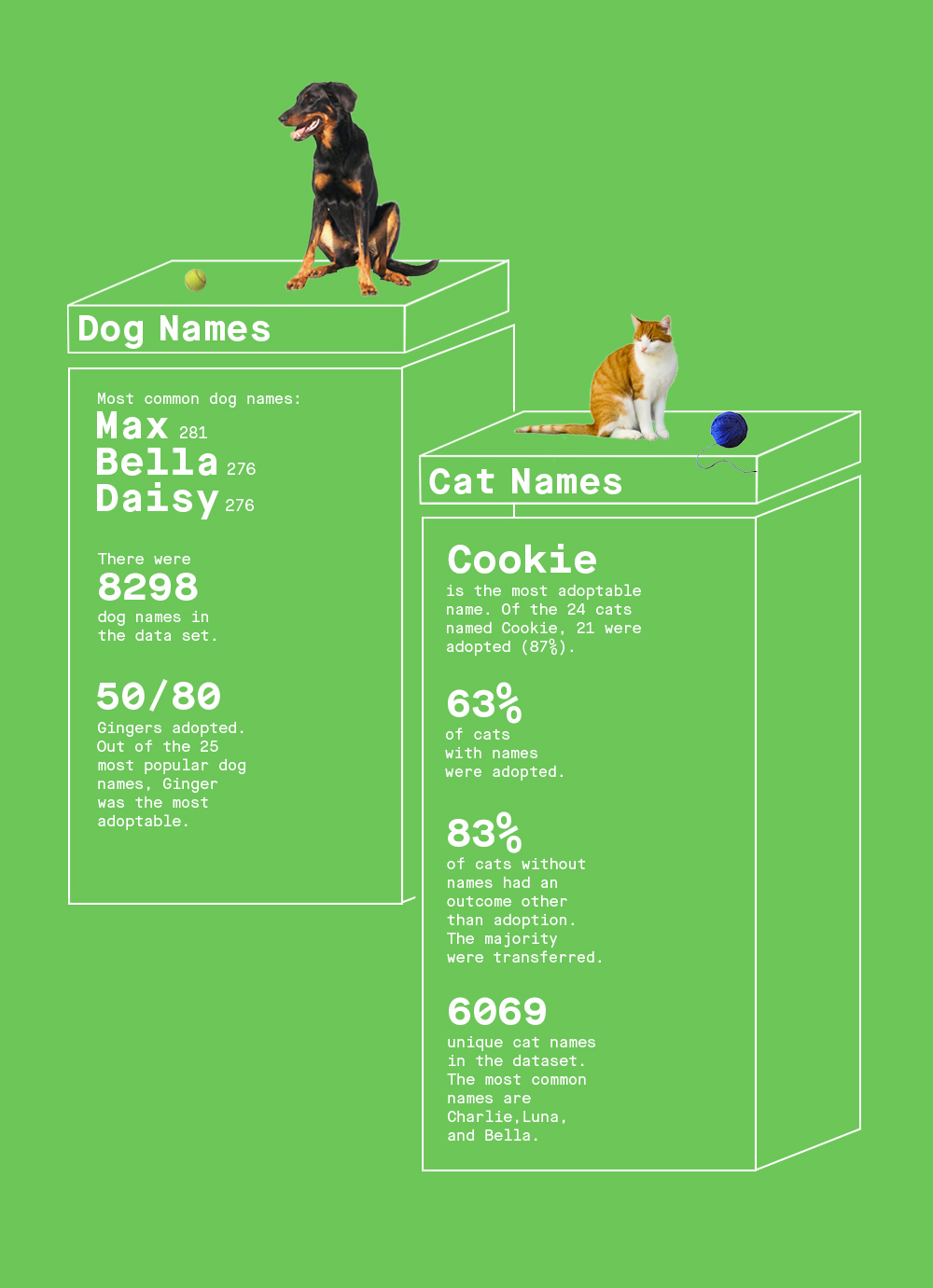 Some adoption days are better than others

According to the model, certain days of the week lead to more adoptions than others. 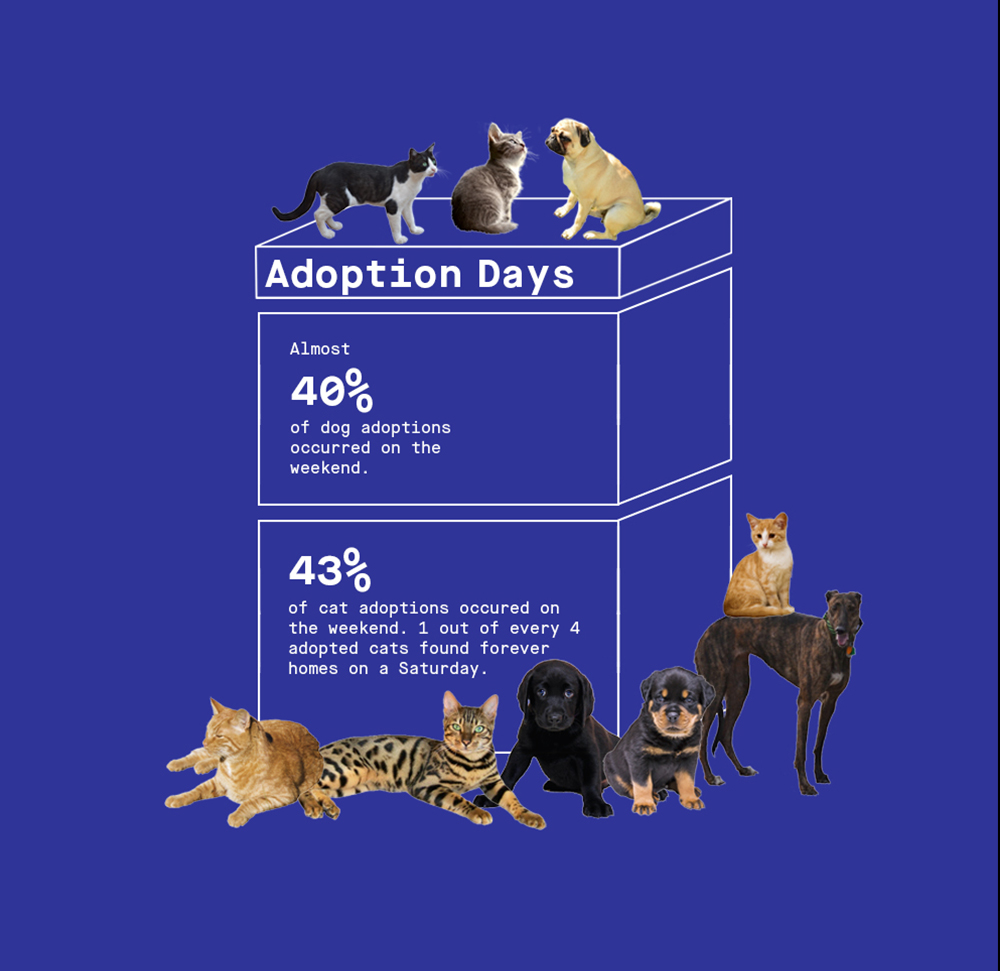 The most “adoptable” animals

So which animals are most likely to be adopted? How old are they? What do they look like? According to data science, these are the most “adoptable” cats and dogs. 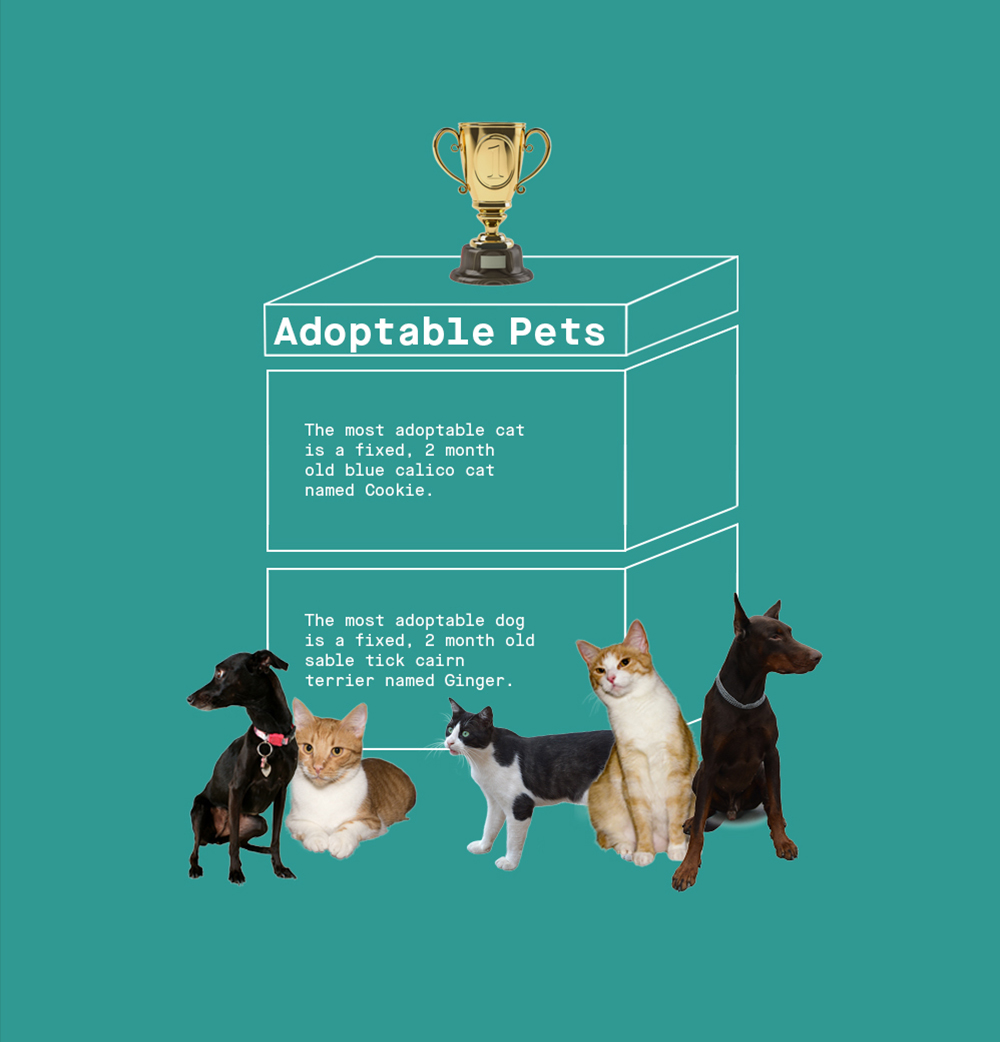 On behalf of all the animal lovers at Thinkful, we’d love for you to share this story to raise awareness and help animals find loving homes.

If you’d like to cite this story on your digital publication or blog, please make sure to mention that this project was conducted by Joanne Lin, a student in Thinkful’s data science bootcamp.

If you'd like to make a donation to Austin Animal Center, you can do so here.