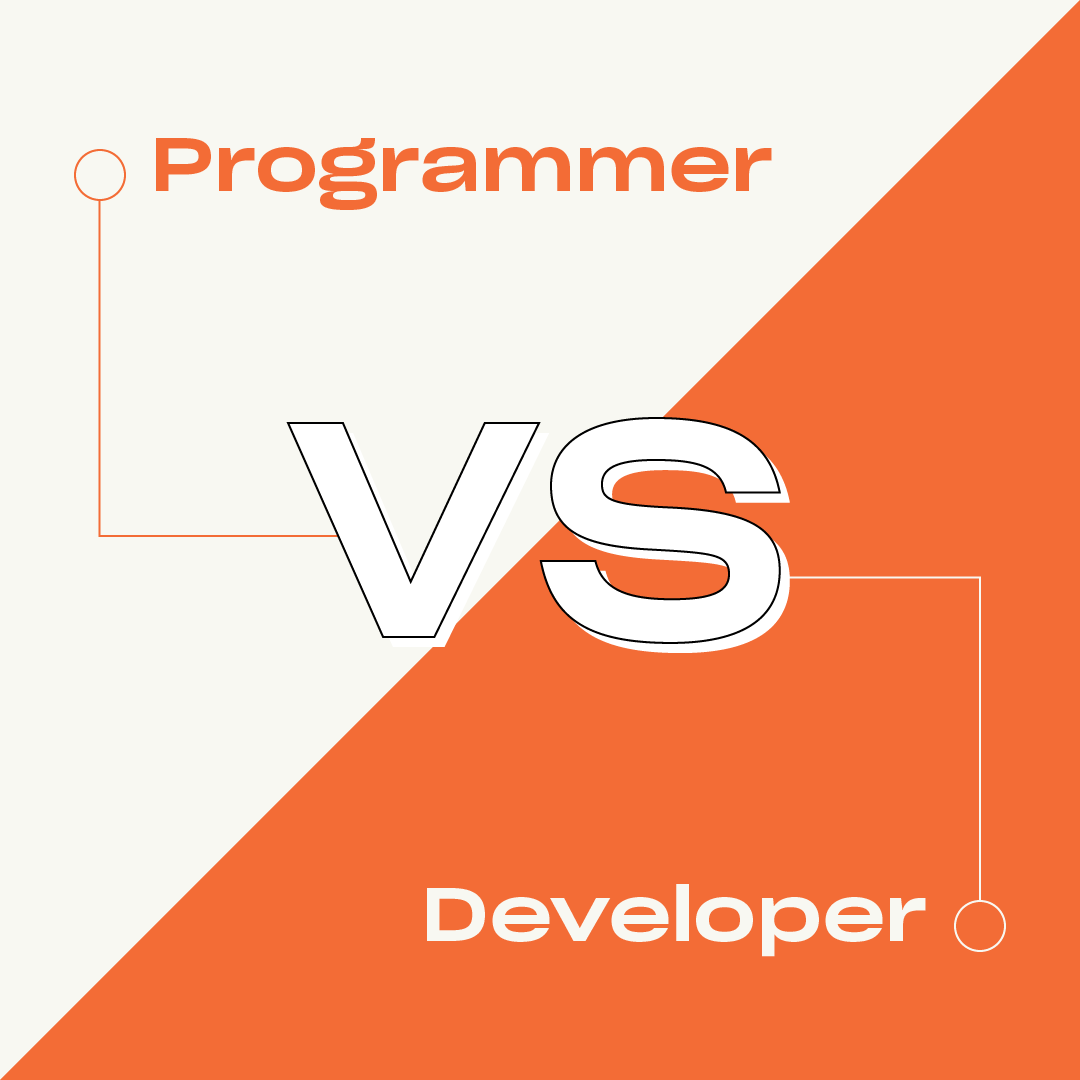 You’ve likely heard of programmers and developers before. These are terms that are sometimes used interchangeably, but in fact, these career titles describe very different professions.

To understand each role in-depth, it’s important to understand their relationship to each other. We’re going to discuss the differences and similarities between programmers and developers, including compensation, job requirements, and more.


What is a Programmer?

A programmer is a professional who writes or creates code for computer applications or software programs. Programmers provide specific instructions pertaining to programming. To be a programmer, you’ll have to actively think about solutions, sometimes abstract in nature, before beginning to code. Programmers have a strong background in coding and computing across several programming languages that often include Structured Query language (SQL), PHP, HTML, JAVA, Extensible Markup Language (XML), C, and C++.

A programmer may be an expert in multiple fields like databases, web development, security development, and more. Depending on their programming skill sets and areas of expertise, they may choose to specialize as application programmers, system programmers, AI and machine learning engineers, or game programmers.

Programmers are primarily responsible for writing code that gives life to computer applications and software programs. They deliberately use multiple programming languages to test out errors and make sure that the code is functional.

What Is A Developer?

However, there is some overlap between the functions or work processes of a software developer and those of a programmer. They both use specialized software to organize data. They also use software to look after the security and recovery of data. Additionally, a software developer has to check the compatibility of systems to make sure that the systems run smoothly for everyone involved.

How to Excel as a Programmer

Besides having a strong foundational knowledge in computer science, a programmer should know how to write clear, logical code. Additionally, to stand out as an efficient programmer, you must be able to read and edit other people’s code. Reviewing existing code gives you an opportunity to understand what works and what doesn’t: insight that’s valuable when you’re updating someone else’s application. Reading another programmer’s code could also encourage you to learn new languages, and see how multiple languages interact.

It is essential for a good programmer to have debugging skills. This becomes important if there’s dysfunctional software, in which case the programmer will need to trace back to the root of the problem. These skills can help a programmer build a flow document. Flow documents help programmers investigate the code and find the specific problem, instead of changing the code entirely.

Apart from the technical aspect, a programmer must be a strong team player. They should also remain optimistic when they’re met with failure, and love to research issues: great programmers are able to learn from their mistakes and constantly improve their craft.

How to Excel As A Developer

Every successful developer has to be a good programmer. If you want to be a developer, you must understand how to read and write code. Skillful programming is an art that is a prerequisite to becoming a developer. Even if a software developer has over ten years of experience, they must continue to practice coding to remain proficient.

If you’re interested in knowing which code languages every developer needs to know, we’ve got some recommendations. If you want to be a developer, you shouldn’t aim to find the exact or perfect solution; there is none. Instead, focus on getting as close to your desired goal as quickly as possible. If you practice your skills by taking on personal projects outside the workplace, you’ll become a faster, more efficient programmer. Lastly, despite the experience, an efficient developer should avoid using third-party libraries blindly without verifying the source code.

Other than coding skills, a developer must also be equipped with project management skills and soft skills.

Even though most of the tasks of a programmer and a developer are closely related, their job profiles and career choices are different. The technical skills required for a programmer are coding languages suxh as SQL, JAVA, Microsoft C#, .Net Programming, and JavaScript. On the other hand, the technical skills required for a developer are typically JavaScript, jQuery, web application development, HTML5, and Hypertext Preprocessor. Despite a slight overlap of skills between the two, companies look for different skills during recruitment. Besides being technical, both of the jobs demand that the individuals possess interpersonal skills like communication and team collaboration.

Programmers may choose to become a programming analyst, SAS programmer, systems programmer, mainframe developer, or .Net programmer. Developers, on the other hand, can work as a PHP developer, web application designer, front end developer, user interface developer, and user experience designer. Both of the professions pay well in today’s rapidly evolving IT market. According to a 2018 report, the average annual salary for computer programmers in the U.S. grew to $84,280, while the annual median salary of developers was $103,620.

The difference in the salaries of these two career paths fluctuates.  This difference exists because the work of a programmer is more specialized, while developers require a broader range of skills. However, despite the difference in salaries, both are excellent career choices if you’re passionate about coding and crafting user-friendly applications.

If you want to become a programmer, some companies may only require a certificate course in programming or an Associate’s degree. It’s always advisable to enroll yourself in a software engineering course that includes system design and development, programming logic, database management, SQL, and programming languages. Programmers must continue to write and learn different codes as the field is rapidly advancing. With experience, a programmer gradually grows to become a supervisor, lead programmer, or analyst.

On the other hand, a developer must be educated in either computer science or software engineering. You may encounter math requirements like calculus, linear algebra, and differential equations. Software engineering also offers specialized programs in computer programming, networking, and operating systems.

Software developers work in two major areas—system software and application software, both of which require efficient knowledge base in Java, C, and C++. Patience is one of the key soft skills that software developers and coders need besides specialization in various languages and programs.

Deciding Whether to Be A Programmer or A Developer

To review, it’s the scope of work that differentiates these two professions. While programmers are involved with more in-depth work and require more technical specialization than developers, developers need to handle a broader range of work that includes overseeing the whole project, or even managing a team of developers.

All in all, choosing a career as a programmer or a developer is entirely up to your preference. Both are challenging careers that are in high demand. Both provide very comfortable salaries and lead to a wide array of enviable benefits, like work-from-home opportunities and generous paid vacation time.

Browse our tips for becoming a software engineer to learn more about careers in the tech world, and how to turn your coding skills into a full-time profession.