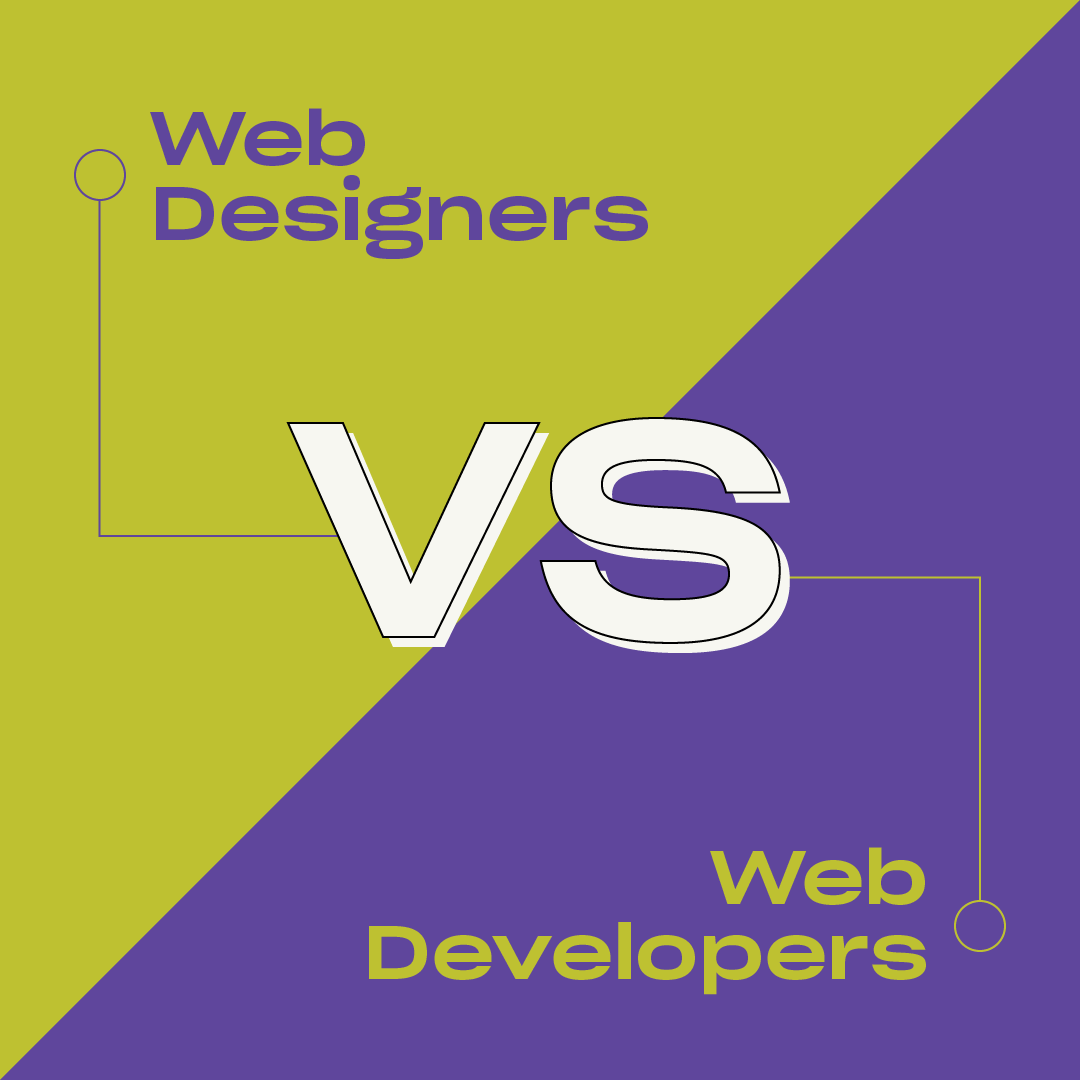 Web designers and web developers are often confused with each other. To many, they seem synonymous. The truth is that these terms are used to describe professionals who work closely together, but have very different roles. To build a successful website, you need both a web designer and a web developer. These two roles are interdependent, calling for strong teamwork between designers and developers.

Launch Your Career in Web Development

What is a Web Designer?

A web designer is a graphic artist who creates the elements of a website and stylizes the content. They are creative people who can tap into the designs that attract and engage an audience. Web designers are involved in the visual aesthetics, structure, and content of a website. They also focus on the style and overall digital experience of a website.

Web designers use various digital applications like Photoshop to customize visual elements. They also use programming languages like CSS and HTML to create and design the content. The designers pick and choose specific colors and fonts to make the website more aesthetically pleasing. They structure the website so that the flow of information is intuitive and easy to access for all users. All in all, designers are responsible for creating a cohesive website, both in terms of structure and content.

What is a Web Developer?

Unlike web designers, developers tend to have a more methodical, logical approach. Web developers combine all the visual elements, design mockups, site structure, and prototypes. These are then converted into code. The developers collaborate with the designer throughout the process until the website is live. Developers are responsible for building the core structure using a variety of programming languages.  While designers create an architectural scheme, developers construct the site itself.

How to Excel as A Web Designer or Web Developer

Web designers and developers have crucial responsibilities requiring a great amount of dedication and perseverance. A web designer must have a unique, fresh perspective to create a new website. Gone are the days when an aesthetically pleasing web design would be enough to draw the attention of users. If you want to be a web designer, you need more than just creativity; you must also have considerable knowledge about the marketing and communication strategies of the site that you’re working on.

Some people think that any graphic designer with a little bit of technical knowledge can become a web designer. This is a myth. Web designing requires a different kind of flair altogether! Web designers need to consider different clusters of audiences and have extensive knowledge of the digital world.  Thinkful’s UX/UI Design course teaches those skills and more.

Meanwhile, a web developer must first choose their specialization—front end or back end—as both of them require different sets of skills. A front end developer has to excel in designing and building layouts and appearances of a website which is guided by the client. On the other hand, the latter has to excel in building the driving system of a particular website. Back end developers must be well versed in writing code that would focus on the structure of the website, allowing data to get transferred easily from the server to the browser.

A web developer must be excellent at writing code, with the sound knowledge of a few programming languages. They must also have the ability to solve problems quickly and creatively. They need to be highly patient and rational while also understanding the designers’ goals. They are ultimately responsible for bringing the vision of the design team to life with their coding expertise.

Both professions are extremely demanding in different ways, and both require patience and perseverance to excel in their respective fields.

If you are interested in becoming a web designer, you’ll need to pursue higher education in web design. You’ll become an expert in fields like digital arts and design, visual communication, multimedia production, as well as interactive usability testing. Some budding designers opt for an accreditationWeb designers also have the ability to be accredited by institutions, such as Certified Internet Webmaster and International Webmaster Association- HTML Writers Guild.  If you value flexible, high-quality education and one-on-one mentorship, Thinkful offers full-time and part-time web design courses, all entirely online.

The ultimate aim should be to create web pages that allow easy and accessible navigation not only on computers but also on smaller screens. To accomplish this, you need to be skilled not only in graphic design but also in how web portals work. Proficient knowledge of web design software like Dreamweaver or Adobe Photoshop are useful too. The average compensation of a web designer in the U.S. is around $66,000.

On the other hand, if you want to be a developer, you should be well versed in web development tools and all of the most common programming languages. You should also understand the required software to develop high quality website content.

The average compensation of a web developer is around $87,000. The compensation is higher than the average pay for designers, but a web designer with a specialization can earn more. For example, a designer with experience in Interaction Design (IxD) can earn somewhere around $92,000, while a mobile web designer can earn around $93,000. Career prospects of both designing and developing are bright for people with creative minds and a passion for coding.

How to Become A Successful Web Designer or Web Developer

To be a successful web designer, you must have a solid work ethic. You should be eager to learn the practices and principles of web design, which can be self-taught or learned through professional guidance. Even with more and more practice, you should keep updating your skills by adopting new technologies that are in vogue. You should also continue reading and learning in order to be aware of the latest techniques and user trends. Immediately after graduating, you will want to focus on building a personal website to promote your portfolio and secure the best job.

While no specific educational qualification is required to become a web developer, you’ll need to choose your specialization and get professional training with an experienced mentor or instructor. You should also learn several coding languages and then focus on other technical skills like Bootstrap and Backbone. Like a web designer, you must also create an online portfolio to maximize your career opportunities.

Next Steps for Your Career in Tech

Time for a quick review. Every successful website requires both a web designer and a web developer. A web designer manages the visual aesthetics, typography,  layout, and structure of a website. They also keep in mind market factors like user demand and the latest trends. This work involves strong creative instincts and above-average visual communication skills. The designer’s vision is then translated into functional models with the help of a web developer.

A web developer is more technically inclined, as the job requires proficiency in writing code and transforming a visual idea into something tangible. Both are stable career choices, and are in high demand regardless of where your area of interest lies—creativity or technicality. Learn more about our online UX Design and Software Engineering courses to kickstart your new career.