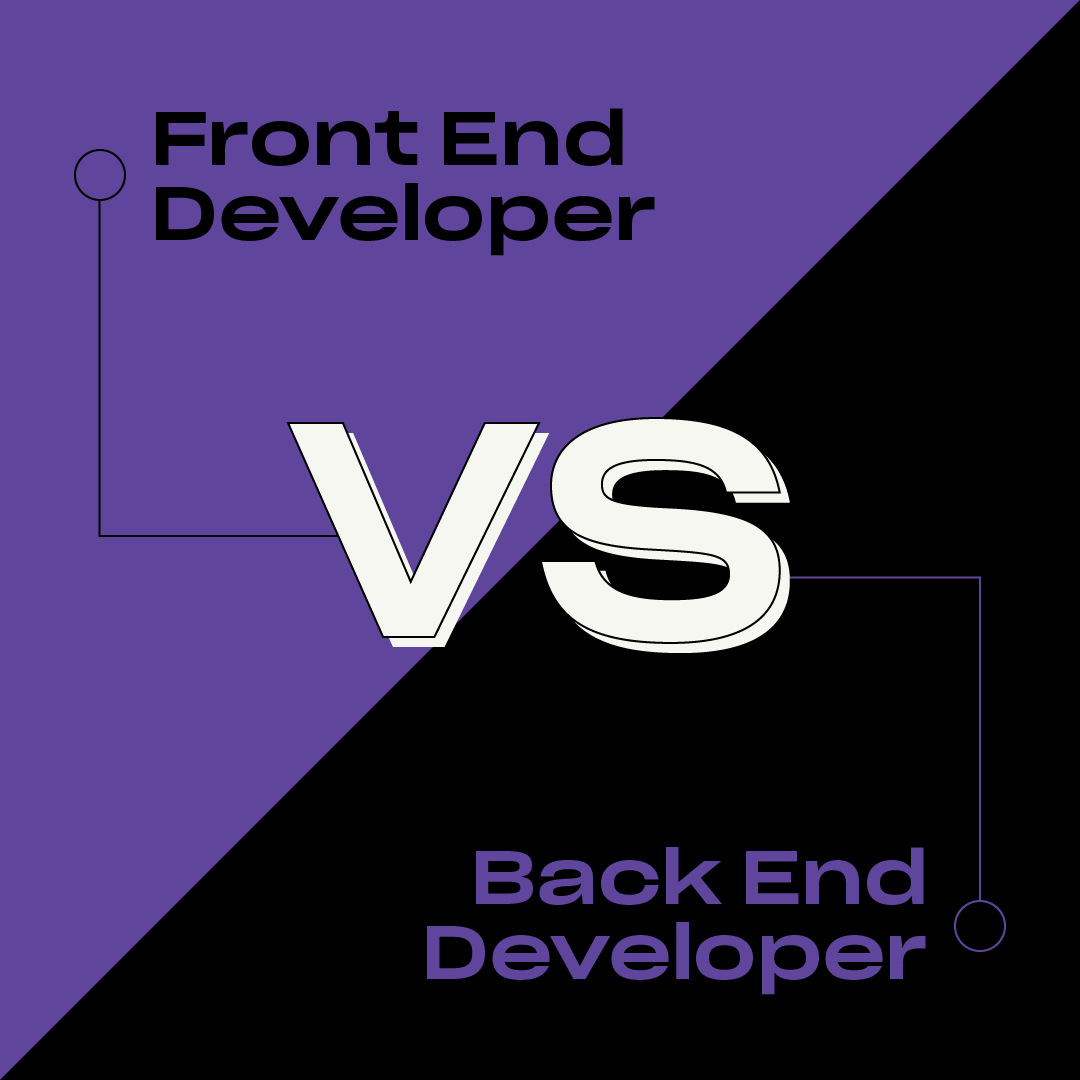 After learning the fundamentals of programming, software engineers can choose to specialize in a particular area of web development. Front-End Development and Back-End Development are two popular career paths to follow.

If you’re interested in a web development career, it’s important to differentiate between these two subspecialties. This article will help you make an informed decision about your future career track and job search.

These terms sound similar enough, but what do they actually mean in the context of software development?

Front-End Development: Any aspect of a website, software package, or app that a user interacts with is referred to as the front end. Also known as the client side of the application, it encompasses everything that a user sees on the screen. Images, graphs, tables, buttons, styles, text, menus, and navigation panes are all front-end components.

Back-End Development: The back end (or the server side) of the website or app can be thought of as the engine under the hood. It’s where most of the functionality happens and where data is processed and stored. Users can’t interact directly with the back end.

What is a Front-End Developer?

A front-end developer is a programmer who writes code to create interfaces and visual aspects of websites, software, and apps. They’re responsible for creating the features and components that are directly viewable and accessible by the end-user.

A person working in front-end development can also be called a client-side developer, front-end coder, or UI developer.

Front-end developers typically use high-level programming and scripting languages such as CSS, HTML, and JavaScript to design the look of a website, and ensure it functions as expected for the end-user.

In addition to having a good understanding of fundamental coding principles, front-end developers need to be familiar with frameworks such as Foundation Backbone, Bootstrap, AngularJS, and EmberJS.

Best Practices for a Front-End Developer

Web development is a fast-evolving space. There are several best practices that software engineers should adopt in order to stay competitive.

Ensuring a website looks the same on all browsers (and there are many!) poses a great challenge even for savvy coders.

To help fix this problem, CSS Preprocessors were developed. They generate CSS from the preprocessor’s own unique syntax. This means the look and feel of a website remain consistent across different browsers. Saas and Less are the two of the most common programs used.

Transpilers are source-to-source compilers. They convert code from one language to another. They are used by Front-End Developers when programming in a language other than JavaScript.

Some of the most common transpilers include:

ES6: Referred to as the next version of JavaScript, ES6 is backward-compatible with older versions of the language.

CoffeeScript: Built into the rails framework, CoffeeScript is a ruby-like programming language.

TypeScript: A Microsoft initiative, TypeScript is a strict syntactical superset of JavaScript.

How Much Does a Front-End Developer Earn?

The average salary for an entry-level Front-End Developer in the US is around $57,017 per year. The national average for mid-level Developers is around $101,666 per year, while an Senior Developer can earn as much as $118,440 a year.

What is a Back-End Developer?

A Back-End Developer is a programmer that implements key functionality of websites, software packages and applications. They also handle content management, data structures, data storage, and the security of the application or website.

Common coding languages for back-end developers include Java, PHP, Python, .Net, and Ruby. These languages are well-suited for the work of back-end development and establishing communication between a website and the server.

Typically, a successful Back-End Developer will be proficient in a range of different programming languages. They should be capable of adapting and learning new technologies when necessary.

A good understanding of development frameworks such as Express, Rails, Laravel, Django, and Spring is an advantage.

Best Practices for a Back-End Developer

Programmers who choose to specialize in back-end development need to go out of their way to keep up with changing technology and evolving coding languages. They need to keep on top of the latest server technology like Nginx, Apache, IIS, and Microsoft IIS.

Hands-on experience in Linux is always an added advantage. Knowledge of web services and application program interfaces (APIs) is also important. A developer who has specialized knowledge of tools like Representational State Transfer (REST) and Simple Object Access Protocol (SOAP) is always going to be in high demand. A back-end developer needs to be highly logical and should be able to come up with effective solutions to meet software goals.

How Much Does a Back-End Developer Earn?

You can increase your earning potential by learning multiple languages and gaining on-the-job experience.

Make The Right Choice For You

Everybody has different strengths and weaknesses, and you should consider yours when choosing a career to pursue. Front-end and back-end programming are equally important; when deciding between them, choose the specialty that you’ll enjoy most in the long-term.

For creative minds who enjoy designing graphical interfaces and easy-to-use systems, front-end development is the way to go.

For more technical people who love mathematical problem solving, algorithms, and databases, back-end development should be the path to follow.

Alternatively, you can always become a full-stack developer. This profession involves the full suite of skills required to handle both front-end and back-end engineering.

Further Reading and Next Steps

Web Development is one of the most popular professions in the world. Regardless of the specific type of skills you possess, the job prospects and career development potential is huge.

Whether you choose front-end or back-end development, there’s a growing need for talented programmers. And if you learn multiple languages, you could bring in high pay and great benefits. Enroll in our full-stack development course to get started and learn all the skills you need in order to land a high-paying job.

Browse our web development blog for more expert tips as you start your career in coding.

What is the difference between front-end and back-end developers?

Is there any overlap between front-end and back-end developers?

Yes, there is overlap between these two specialties. Certain languages are used for both front-end and back-end coding, and many skills apply to both.

How do I get into either front-end or back-end development?

You'll need to learn a number of different programming languages to get into either front-end or back-end web development. You should also put those skills to use by actually building the front end or back end of a few different sites, and showcasing that work on your professional portfolio. Finally, make it clear in your resume and cover letters that you're passionate about specializing in that specific area of development.