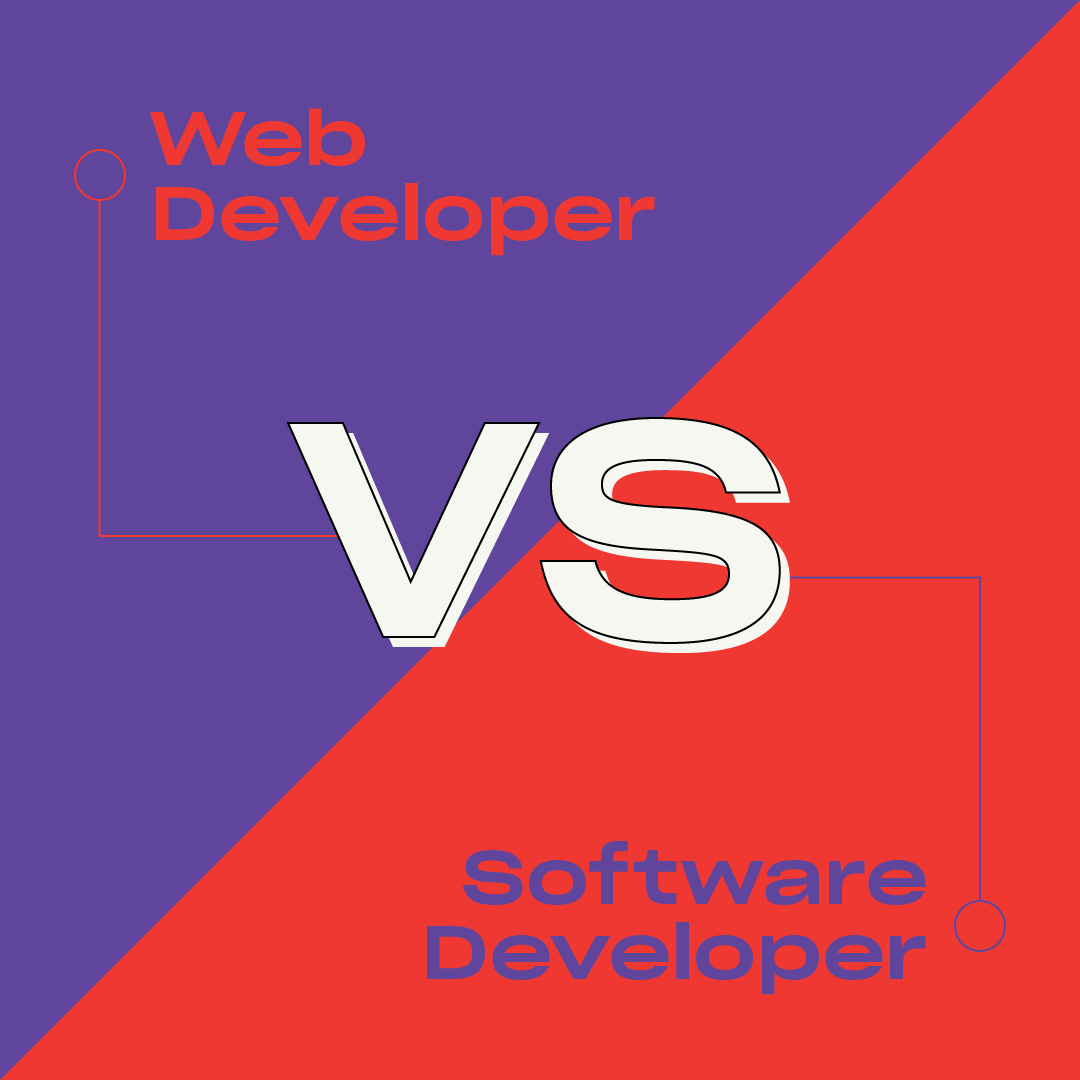 You’re probably familiar with the terms ‘web developer’ and ‘software developer’, even if you don’t fully understand what they mean. Many who are new to coding even think that they’re the same thing.

But if you're trying to pursue a career, you should know exactly what a developer does, and the differences between these two closely related professions.

These two terms describe similar areas of expertise, but they’re not the same. In this article, we’re going in-depth to discuss the differences and similarities between both titles, including pay, job requirements, education, and more.

Answer a few questions to find out which high-paying career path suits you best.


What's The Difference Between Web Developers and Software Developers?

Web Developers focus on building websites and apps, while Software Developers specialize in creating more complex programs for both computers and mobile devices.

What is a Web Developer?

Web Developers build apps and interactive websites. Web development can include everything from simple text files to complicated data processes.

Web developers are creative people who build websites from the ground up. To do this, they need to be proficient in programming languages like JavaScript or Java. They should also be clear on the goals of the business, which will dictate the design of the website.

If you’re considering a career as a developer, then you’ll probably want to explore what a web developer’s day looks like from start to finish.

What is a Software Developer?

Software Developers, on the other hand, are responsible for creating more complex applications and programs for computers and mobile devices. They create, conceptualize, program, document, test, and upgrade software and their components.

How to Become A Web Developer or Software Developer

Once you have a firm grasp of coding basics, you'll need to hone in some of your technical prowess and soft skills in order to ultimately become a Web Developer.

Both web and software developers are dependent on writing code. With that being said, excelling as a Web Developer or a Software Developer requires a different set of skills.

A Web Developer needs to have a strong knowledge of advanced JavaScript. They should also learn Bootstrap, HTML and CSS in order to design the fundamentals of a website.

If their job requires them to design and customize websites, it’s important that they also understand the basics of user experience.

Like a Web Developer, a Software Developer should also be able to write code that’s clean and can be reused, tested, and read clearly. They should have a firm grasp of the business operations of the organization so they can deliver the exact type of software for their customer needs.

Moreover, a Software Developer is expected to create solutions that are scalable and, at the same time, increase profits for the company.

As opposed to web development, software development involves a broader range of skills including DevOps, which is used to unify software operation and development.

Both professions have their own advantages and disadvantages. The average salary of a Software Developer is higher, but Web Developers tend to earn more per hour due to market demand. Web developers can also work remotely and do freelance work, so they enjoy added flexibility and are not limited to their location.

Comparatively, Software Developers typically secure jobs at big organizations and government offices. Their work includes close collaboration with a team of computer programmers. Their work schedule may also include long hours spent on-site working with their development team as well as company executives.

Though both titles are similar, their core functions are different. In addition to their coding skills, Software Developers need to have adequate knowledge of the legal affairs surrounding the business. They may also be expected to handle databases.

According to the forecast of the Bureau of Labor Statistics, careers in web development are targeted to grow by 13% between 2018 and 2028. On average, the salary of a Web Developer is around $75,000, but this varies greatly.

Comparatively, the Bureau of Labor Statistics found that the average salary of a Software Developer is $103,620. However, a Web Developer can easily freelance with various companies simultaneously, adding to their income potential.

Both professions have their own pros and cons, which depend entirely on your unique priorities.

Getting Started As A Web Developer or Software Developer

If you have a creative mind and want to work with independence and flexibility, web development may be the career for you.

And if you’re relatively new to the field, don’t wait around for your first paying job to gain experience. Get involved in mock projects to practice your development skills. These mock projects could include a fictitious brand, a model website, or redesigning a real site.

These exercises will help you learn to write testable and efficient code.

Next, create a website to host your portfolio. In the process of building up your skills through mock projects or jobs, you can showcase your portfolio to secure paid projects.

Unlike Web Developers, Software Developers often have a Bachelor’s degree in Computer Science, including knowledge of SQL Server, C++, Visual Basic, and Java. But even more important than a degree is your coding knowledge: you’ll need to understand most of the common programming languages to get hired by the best IT companies. The broader your knowledge base is, the more web development career options you'll have.

Regardless of your specific path, you should have your own github page or portfolio website. This website will reflect your own passion and unique value as a Software Developer.

It’s also important for Software Developers to excel at soft skills like teamwork and innovative thinking. By developing these skills, your programming goals can be communicated effectively to your teams.

If you’re interested in learning even more about the world of development, browse through our collection of software engineering career tips to get started.

But it takes more than a few blog articles to learn the skills to become a web developer. That's where we come in. You have big career goals, and Thinkful offers the flexible, high-quality education and mentorship programs to help you get there.

What's the pay difference between Web Developers and Software Developers?

Is there any overlap between Web Developers and Software Developers?

There's quite a bit of overlap between a web developer job description and that of a software developer. Both roles will need to know multiple coding languages, work well within a team, and be comfortable troubleshooting code.

If you want to pursue either of these roles, you should start by enrolling in a course where you'll learn to code, earn a certificate of completion, and work on projects to include in your portfolio.