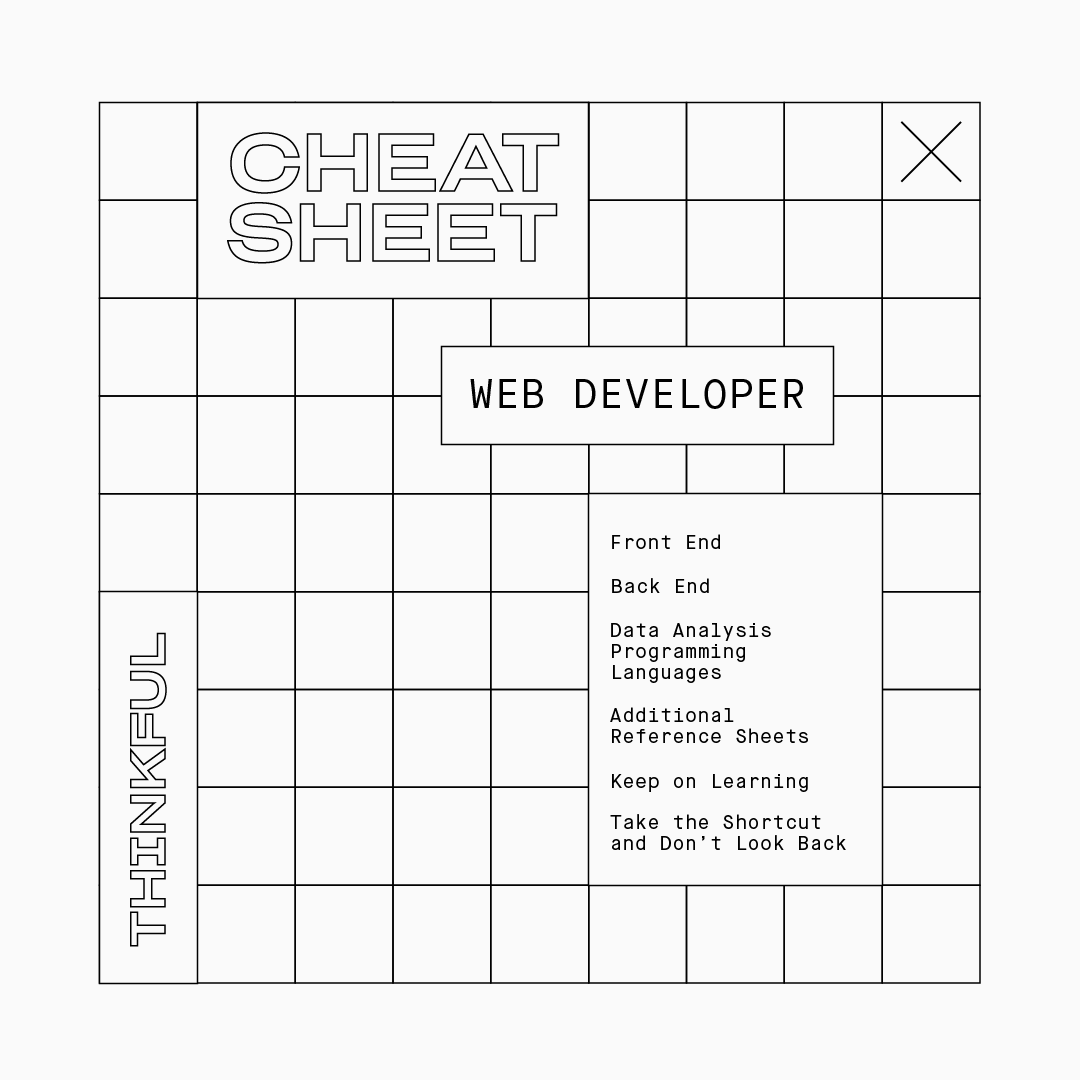 There are about 700 different coding languages, including server side, client side, and the obscure ones nobody really uses. That number will only go up as new languages and technologies are developed. Plus, the old favorites like JavaScript and CSS are still evolving with new integrations and applications.

Basically, software engineers have a lot of stuff to remember. It’s often faster to turn to the internet for answers than to spend time testing out their own solutions. And developers who work in teams often have to look up certain commands and languages, especially when editing others’ code.

That’s why developers of all skill levels are familiar with the power of the all-mighty cheat sheet. As good as it may feel to come up with the exact right line of code on your first try, or recall how a previous bug was fixed from memory, that’s not always reality. As a programmer, you’re going to rely on a range of resource guides to find solutions for common glitches, and that’s ok.

We’re all for working smarter and saving time when you can. So we put together our ultimate list of cheat sheets for web developers. We organized these nifty links by category: front end, back end, data-centric and general, allowing you to pick and choose the most useful tools for your work. But they do have one thing in common: all of these cheat sheets are fast, to the point, and designed to help you quickly answer specific questions about your code.

Whether you specialize in building websites or developing apps, these links will be the most-visited pages in your Favorites.

Client side programming includes the development of all the features a user interacts with: buttons, fonts, images, and every other element a customer can see or tap. HTML, JavaScript and CSS are just a few of the most versatile front end coding languages. Front end languages can be applied in different ways to achieve the right look and feel for your site or app.

A motivated developer is constantly learning the latest integrations and experimenting with new coding methods. To help you keep up, here are some of the most useful reference guides for front end languages. We threw in a couple of cheat sheets for Bootstrap, the popular CSS framework often employed for mobile interfaces. You’ll also find a helpful guide outlining fonts and how they align with different font families, as well as a guide to markdown syntax.

Server side languages like PHP, Python and Ruby control how an app or site actually operates. Back end programmers figure out the best way for an app to communicate back to the server, and decide how user data should be collected and stored. Since back end programmers are responsible for generating the logic that controls the way the whole site functions, many developers start off with front end before moving on to back end languages.

Below are some cheat sheets for the most common back end languages. We also included reference sheets for Express and Node, which are frequently used for server side applications of JavaScript. Use these to quickly troubleshoot issues, or as useful reminders while you hone your back end programming skills.

Data intake and storage is incredibly important for many developers. Companies of all sizes rely on capturing customer data, and it has to be stored in a way that’s useful for the organization and protects the users’ privacy. The engineering team is usually responsible for figuring out how to make that happen.

Programming skills have also become increasingly valuable for analysts and data scientists. With the help of a data-centric coding language, analysts can organize massive sets of data. A knowledge of web development enables data professionals to find patterns and make predictions much more efficiently.

The following cheat sheets are most relevant for those of you who work with large datasets. SQL, R and MATLAB are all popular languages favored by analysts and developers. Tools like PostgreSQL and MongoDB, which are sometimes used alongside SQL, also made the list. If you find yourself working with tables and probabilities on a daily basis, these one-sheet reference guides will come in handy.

Some tools have become so beloved by developers, they’re used by nearly every programmer. Git and Heroku are both widely-used tools that deserve their own reference sheets. And if the marketing team calls on you to amp up the results of their published content, you’ll probably turn to the SEO cheat sheet or the developer’s guide to WordPress.

Maybe you’re in the early stages of learning computer programming, or you’ve been at it for a decade and need a refresher once in a while. In any case, no one will fault you for saving these shortcuts to your desktop.

The field of web development will never get boring. As a programmer, you’ll constantly have to learn new tools and discover fresh applications for the old ones.

There are a few ways to keep up on all the current engineering trends. For starters, you can leverage social media: create a Twitter list that includes some expert developers, as well as all the biggest tech conferences and companies. Follow the biggest industry movers and shakers on LinkedIn (extra points if you jump into the conversation yourself, which makes you more visible for job opportunities).

There are also thousands of free tutorials available to beginners and expert coders alike. Youtube videos and webinars allow you to practice a new skill on your downtime and learn at your own pace. Even if you’re focusing on one specific coding language or tool, you’ll find plenty of free resources; all you need is wifi and some motivation to learn.

If you’re really committed to elevating your career in programming, load up your Kindle with some of our recommended books about web development. You’ll gain deeper insights into how experienced developers think through problems. And since all of these authors are experienced programmers themselves, you’ll get a first-hand look at how they succeeded, giving you a clearer picture of how your own career might progress.

Finally, keep up with the latest developments in software engineering to stay ahead of the curve. Sign up for industry blogs, so the news that affects your career is delivered right to your inbox.

Take the Shortcut and Don’t Look Back

In the world of computer programming, there are often multiple ways to achieve the same result, and it never hurts to take a shortcut when you can. Hopefully these cheat sheets speed up your process and help you clean up your code.

All of these tools combined will make you a more creative, confident, and efficient web developer.

And if you’re ready to accelerate your software engineering career, let’s schedule a call to chat about your options.