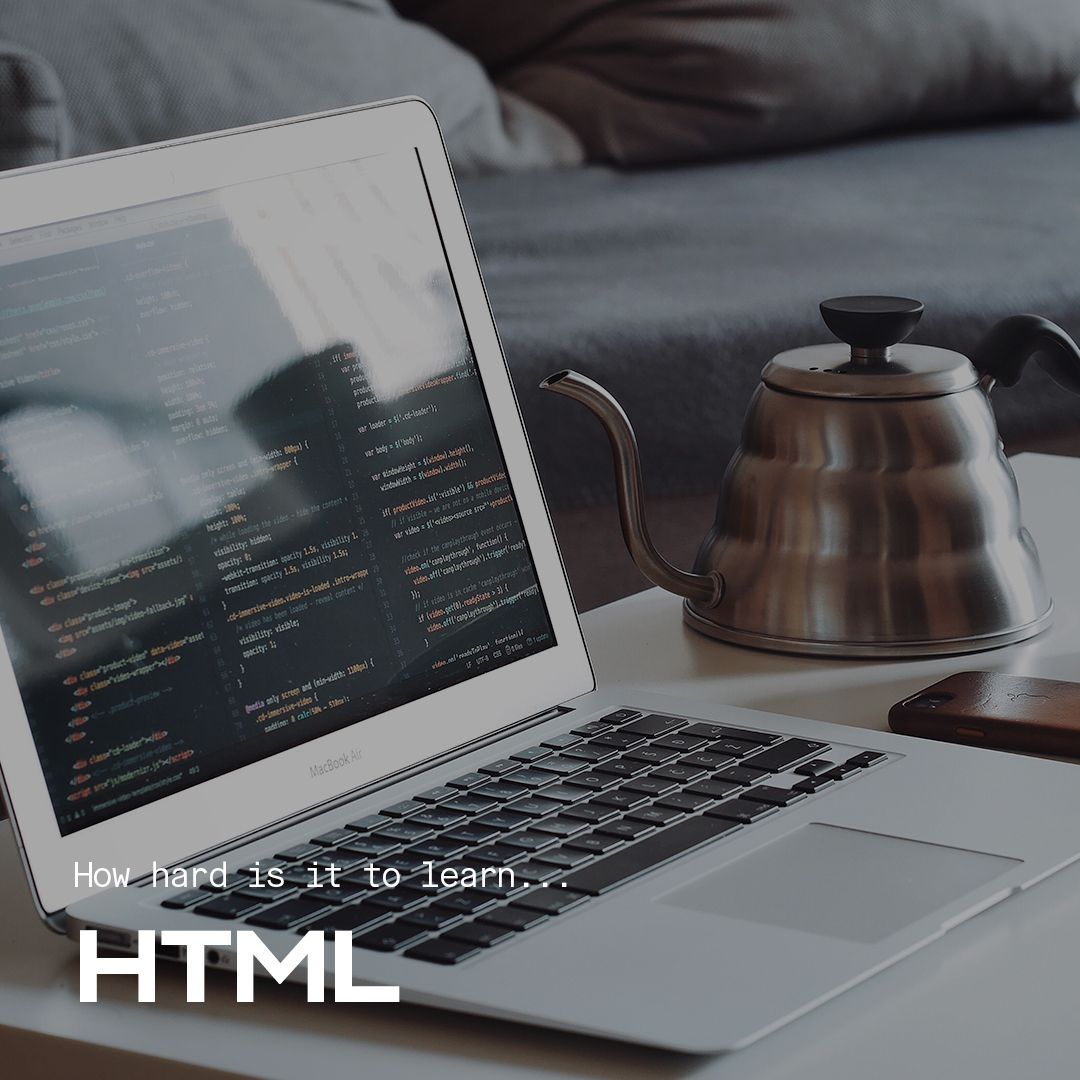 How Hard is it to Learn HTML?

Among the many fundamental pillars of the digital world, HTML is one that has been around for a long time. It’s used to create web pages and apps, and to this day it remains one of the most widely used coding languages.

If you’re reading this article, chances are you’re interested in learning HTML. Perhaps you’re even considering becoming a web developer or a UX designer. In this article, we’re going to explain the basics of HTML, why it’s useful, and how you can learn to master it. But before we move ahead, you’ll need to know the following terms.

Hypertext: “HyperText” can be described as "text within text." Any text which has a link within it is called hypertext. So, whenever you click on a link on a webpage which sends you to another webpage, it means that you have clicked on a hypertext. It is a link to connect two or more web pages or HTML documents with each other.

Markup language: Markup language is a computer language used to apply layout and formatting changes to a text document. Markup language helps make your text more interactive as well as dynamic. It can also be used to convert text into images, tables, and links.

HTML is an acronym that stands for HyperText Markup Language. It allows you to create and structure sections, paragraphs, headings, links, and blockquotes for web pages and applications. It is a system that lets the user define the structure of the content in their web page, by using elements wrapped in universally supported tags.

HTML is a language used to create web pages that are displayed on the World Wide Web, using plain text. Each of these web pages comprises a network of connections to other web pages, which are called hyperlinks. These web pages and websites can then be seen by anyone else who is online. In fact, every single web page that is on the internet is written using one or the other version of HTML.

However, HTML is not a programming language, which means that it can’t create dynamic functionality. Instead, it is a markup language that lets you define the structure of your content. It allows you to organize and format documents, just like in Microsoft Word.

HTML consists of a series of elements that you can utilize to enclose or wrap different parts of your content, to make them appear or act in a particular way. The tags used for enclosing, can ‘hyperlink’ a word or an image to some other place on the internet. It can also be used to italicize words, increase or decrease the font size, and so on.

Every page on the internet is an HTML file. And each HTML file is simply a plain-text file with a ‘.html’ file extension instead of ‘.txt’. Often, a web site contains several inter-linked HTML files, which can be edited using any HTML editor.

A browser would not be able to display text as elements, or load elements like images, without HTML. HTML code makes sure the formatting of text and images of your online browser is correct. It also defines the basic structure of the page. Then, upon this structure, Cascading Style Sheets (CSS) can be overlaid to modify its appearance. So, HTML can be perceived as the skeleton of a webpage, while CSS as its skin.

How Does HTML Work?

You can identify HTML files by determining if they end with an .html or .htm extension. Some older versions of Windows only allow three-letter file extensions, therefore they used .htm rather .html. However, both of them have the same meaning and both are in use today. Although, experts recommend sticking to one extension only, since some web servers prefer one extension over the other.

HTML documents can be viewed using any web browser like Google Chrome, Safari, or Mozilla Firefox. The web browser reads the HTML file and then displays its content for the internet users to view it. In general, the average website includes several different HTML pages. Each HTML page consists of elements, also known as a set of tags, which are like the building blocks of web pages. These elements create a hierarchical structure of the content into sections, paragraphs, headings, and content blocks.

Some beginners might confuse HTML as a programming language, but the truth is that working with HTML is coding, not programming. Hopefully we can provide you with more clarity with the following example of an elementary HTML document:

Now, let’s describe the example mentioned above in detail.

<!DOCTYPE>: This tag identifies the version of HTML and informs the browser of it, and also defines the document type.

<html >: This tells the browser that this is an HTML document. Any text that is placed between HTML tags describes the web document. It’s like a container for all elements of HTML, except for <!DOCTYPE>.

<head>: This tag should always be the first element inside the <html> element, which contains the information about the document (metadata). Remember that it needs to be closed before the body tag opens.

<title>: As the tag suggests itself <title> is used to add the title of that HTML page which is displayed at the top of the browser window. It should be placed inside the head tag and is usually closed immediately.

<body>: Any text which is placed between <body> tags, describes the content of the webpage’s body which is visible to the end-user. It contains the main content of the HTML document.

<h1>: First level heading of the webpage is described by the text between <h1> tag.

<p>: Paragraph of the webpage is described by the text between <p> tag.

And that was a brief insight into a rather simple HTML code. By now you may have a basic understanding of how easy or difficult HTML is to work with.

Because the basics can be covered quite quickly, HTML is relatively easy to learn. And with what it allows you to create, it is a quite powerful tool as well. Under the direction of the World Wide Web Consortium, or W3C, which is the organization charged with designing and maintaining the language, HTML is constantly undergoing enhancements. Their aim is to meet the demands of the rapidly growing internet audience.

How long it takes you to learn HTML depends on what you want to use it for. Simply knowing the principles of HTML should take a few days of reading and memorizing the codes. In fact, you can learn the basics in as little as an hour! And once you understand the tags, you can even start creating your own HTML pages!

However, using HTML and designing interactive websites is a different story altogether. We believe that designing a good website is about 50% skill and 50% talent. Learning HTML techniques and knowing the correct tag usage can strongly improve your work.

Also, having decent knowledge of design as well as the audience you’re focusing on will increase your website’s chances of success. Fortunately, all these requirements can be researched and fulfilled. You just need to be willing to put in the effort. This will ultimately lead you to create better websites.

Once you start running your website, you will be amazed to witness the wide range of skills you can learn from it on top of HTML. These skills can range from aspects of graphic design, and typography, to computer programming. You will notice that your general efficiency with computers will improve a lot.

The best part, however, about learning HTML is that you do not have to be online all the time! You can write the code for your entire website offline and save it on your computer. Then, all you have to do is transfer all the files onto the web. Whenever you have new content to add, you simply upload that to the existing online version of your website-- that’s it!

Although you don't need specific software to write HTML code and any text editor will do the job, a good HTML editor will offer more functionality and ease of use. While writing your HTML code, it's always a good idea to validate it using an HTML validator, like the one offered for free at World Wide Web Consortium.

Have fun with it and experiment! But remember to remove any unnecessary code once you're finished. The shorter the code, the easier it is for the browser to load.

Hopefully this article has given you some insights and answers to questions regarding HTML. HTML is perhaps one of the easiest front-end programming languages to master. So if you want to learn HTML, then go for it! With patience and practice, you’ll learn to make the most of this popular language.

If you’re interested in learning more about starting a career in tech, Thinkful’s blog is full of useful resources that will steer you in the right direction.